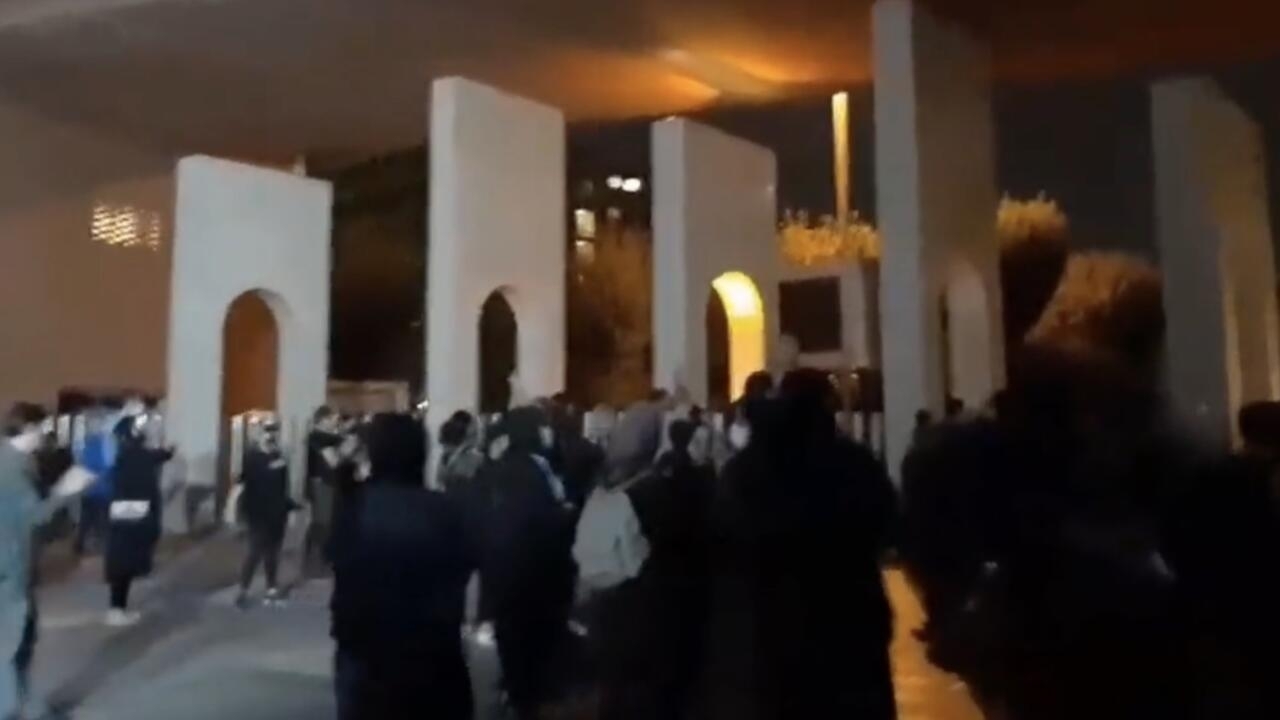 Iranian university students have been protesting against the Islamic regime in Iran since October 1. Videos document the brutal repression of these protests by the security forces in the universities: dozens have been injured by beatings and shotgun bullets and dozens more were arrested, according to students at these universities. Our Observer, a student at Sharif University, Iran’s most prestigious university in Tehran, witnessed the violent clashes.

With the start of the Iranian school year in October, nearly all major universities in Iran have joined widespread protests over the death of Mahsa Amini following her arrest by the “morality police”. Human rights organisations have documented the arrest of 106 students by security forces – a figure that does not include those arrested during violent clashes at Sharif University on October 2. The exact number of students arrested is not yet clear.

Security forces fired on students at Azad Pounak University in Tehran. [It is not the University of Isfahan.]#MahsaAmini #IranRevolution2022 pic.twitter.com/894uHlUhmV

At Azad University in Punak, a neighbourhood in northwestern Tehran, students flee from security forces who are shooting at them with shotguns. Video taken on October 1, 2022.

Iranian security forces – in particular, Basij forces, a paramilitary branch of the Islamic Revolutionary Guard Corps – have been brutally repressing protests at universities. They cracked down on protesters using batons, shotguns, paintball guns and rifles, according to our Observers in Iran.

On October 2, Sharif University faced one of the most severe repressions of student demonstrations in recent years. The violence of the security forces was so brutal that the local Basij forces, who had initially clashed with the protesters, issued a public statement on October 4 “condemning” the violence against the students and demanding, “The least [the security forces] should do is to guarantee that this violence never happens again, and to make amends for the moral and economic damage done to the students and teachers who were victim of this violence”.

In Mashhad, the stronghold of ultra-conservatives in Iran, students protest in “Ferdosi University” Women have taken off their headscarves and are twirling them in the air. #MahsaAmini #IranRevolution2022 pic.twitter.com/4yvfX8xCza

Women protesting at Ferdowsi University, in Mashhad, Iran, take off their headscarves and wave them in the air in this video taken on October 1, 2022.

Iranian university students are holding strikes, rallies and demonstrations in dozens of universities, perhaps in over a hundred across Iran. [University of Technology, Isfahan⬇️] pic.twitter.com/znSzUsIhZr

Students at Isfahan University chant “No to headscarf! No to violence! Freedom and equality!” in a video taken on October 1, 2022.

‘They cannot win this, we will not allow it, not this time’

Jina (not her real name) is a student at Sharif University. She was present at the protests at the university on October 2. She was severely injured in the demonstrations, but says she was able to survive “with the help of people and comrades”.

Some teachers put themselves between us and the Basijis to clear a safe path for us from the university to the metro station next to the university. The teachers assured us that we could go outside through the gates of the car park.

When we got there, we suddenly found ourselves trapped by the Basijis. They gassed us, shot at us with shotguns and arrested at least 30 or 40 students.

According to eyewitnesses and videos, slogans including “Death to the dictator”, “Death to Khamenei”, and “Hey hey ho ho mullahs got to go” were chanted during the protests. Students also chanted “Woman! Life! Freedom!”, a slogan which gained popularity following the death of Mahsa Amini.

‘Even now, I have no idea how many of my comrades were arrested or how many were injured’

As many of us as we could, ran back towards the university… but at that point, the Basijis were there too. They shot at us again and arrested many more.

The news about these savage attacks on us made Mohamadali Zolfigol, the minister of science, research and technology, come to the university later that day. But he just came to insult us and the few teachers who were supporting us. In the end, he said he had talked with the security forces and that the gates were safe so we could leave.

We didn’t believe him at first. Finally, we heard the voices of people outside the main gate of the university and some friends outside sent us messages to say that people are there and there weren’t many Basijis at the gate. Then, we went out. People who gathered there saved us. Even now, I have no idea how many of my comrades were arrested or how many were injured.

In the end, I cannot put into words what we experienced there. It was apocalyptic. It was like a war zone, every time a student fainted, either from gas or fear or something else, there were bloodstains here and there.

I know they wanted to make an example of us so that other students in other universities would stop protesting. And I am glad it did not work. I think yesterday, for the first time in our history, not only university students but also high school students protested.

An example of rubber bullets fired at Sharif University students on October 2, 2022.

And yes, I am scared. I saw my parents waiting for me on the street and my mother fainted when she saw me. That’s when I realised how scared I was. You have to be stupid not to be scared of these ghosts. I will lick my wounds for a day or two, but then I will keep protesting, either in the university or on the streets.

>> Read more on The Observers: Iranians fight back as police violently repress protests over death of Mahsa Amini

Widespread protests have rocked Iran since September 16 following the death of 22-year-old Mahsa Amini after being arrested by Iran’s notorious “morality police”. According to Iran Human Rights, an independent organisation based in Oslo, at least 133 protesters have been killed by security forces in Iran between September 16 and October 2.