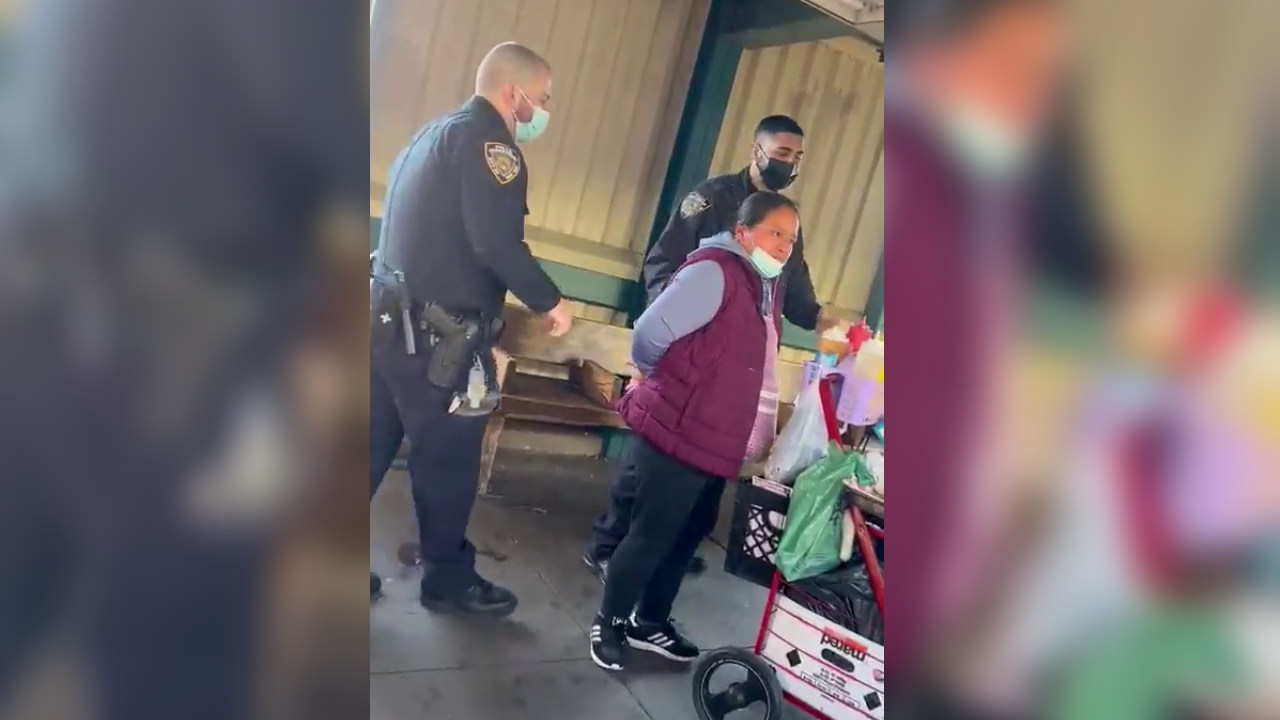 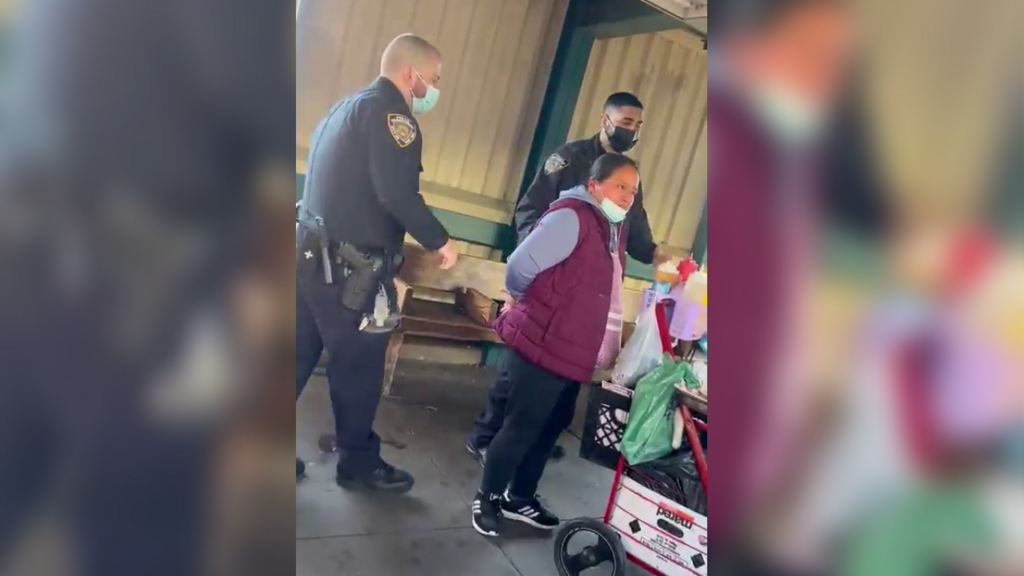 A fruit vendor in the New York City subway was arrested by police on April 29 and had her goods confiscated for not having proper licensing. A video of the arrest went viral, prompting outrage from advocates who argue that New York City street vendors have been treated unfairly by police, while at the same times it’s become more and more difficult to obtain permits to sell food.

Longtime fruit vendor Maria Falcon was on a platform in a Brooklyn subway station on April 29 when she was handcuffed by police. Her daughter, who was with her at the time, filmed the incident in a video that was posted on May 7 and quickly went viral.

The video shows Falcon being led away by one police officer, as another one follows with her cart of fruit. Falcon told media outlet amNewYork that she was not selling fruit from the cart when police approached her.

Horrific treatment of Maria, a mother, immigrant entrepreneur & her *daughter* who filmed

Earlier this week, Maria was arrested for selling mangoes & kiwis to customers she’s served for 10+ yrs

Shame on our city for choosing cruelty, instead of supporting hardworking mothers pic.twitter.com/sjonO5FMjM


The video was shared on Twitter by the Street Vendor Project, a non-profit organisation that advocates for New York City street vendors to obtain licences and permits as well as grow their businesses, championing street vending as an integral part of the city’s culture.

Another video shared by the association shows the cart with Falcon’s goods – chocolate bars as well as bags of cut fruits, such as mango, strawberries and kiwi.

Maria wanted to show the work she was arrested for:

“These are the fruits & box of chocolates we sell – it takes us 3 days to sell this box. This is the honorable work we do – we aren’t hurting anyone or anything” pic.twitter.com/Gwgw1v2fhG


Falcon, who has been selling goods from a cart in New York City since 2008, was held in the police station for two hours and the officers confiscated her cart and goods. She was searched for illicit items and then issued a citation for unauthorised commercial activity.

‘All I want is a place to work safely’

Falcon told amNewYork about the experience:

I felt terrorised. I set up in an area where I’m not in anybody’s way. I’m up against the wall and I’m just there, not to do anything to anybody, just selling things like fruits and churros.

Just let us work with dignity. We are immigrants, we’re not hurting anybody. We women are not at home waiting for our husbands to come and earn for our families. We’re out working and trying to provide. All I want is a place to work safely.

Falcon, who is originally from Ecuador, explained that she sets up her cart inside subway stations during colder months usually, but has opted to continue selling there during the pandemic as there is more foot traffic. She has been arrested for vending before, and was ticketed earlier in April, but Falcon said this is the first time that the police have taken her products.

The Street Vendor Project explained in a Tweet that Falcon does have a valid food vendor license – meaning she has passed food safety courses and pays sales tax on her business – but doesn’t have a permit for mobile food vending. These permits authorise individuals to sell prepared foods after passing a Department of Health inspection ensuring that they meet health code requirements.

And getting a valid permit isn’t an easy feat, due to caps on the number issued. Currently, New York City allows only 5,100 street vending permits – a figure which hasn’t increased much since the early 1980s when the limit was first proposed. And because permit holders can renew their authorisations indefinitely, it’s hard for the thousands of people on the waitlist to ever get approved.

According to the New York City Department of Health website, the city will issue 445 additional permits each year over the next decade, starting in July 2022, allowing some of the people who are already on the waitlist to obtain a legal permit.

Still, there are an estimated 10,000 to 12,000 vendors in New York, most of them operating illegally. Police, as well as the Department of Consumer and Worker Protection (DCWP), issue hundreds of citations to unauthorised street vendors a year, with a maximum fine of 1,000 dollars (around 960 euros). And the number of citations has increased back to pre-pandemic rates: 1,621 tickets were issued in just six months of 2021 compared with 1,609 in all of 2019.

These regulations – alongside the major impacts of Covid-19 in New York City – have made it more and more difficult for the city’s street vendors to make a living.

Maria Falcon’s arrest harkens back to similarly high-profile incidents involving food vendors. In 2019, an Ecuadorian immigrant was arrested in a subway station and had her equipment confiscated for selling churros. And last September, city officials shut down a stall run by a Bronx vendor without a licence. A viral video showed city workers dumping her fresh produce in the garbage.

Complaints against street vendors include obstruction of sidewalks, health and safety concerns, as well as impacts on nearby small businesses. Meanwhile, advocates say that street vendors help the local economy and contribute to the culture of New York City.

“Imagine having two city agents and police officers coming to check on you,” said Carina Kaufman-Gutierrez, deputy director at the Street Vendor Project. “The city is pouring all these resources into criminalizing and shutting down these small businesses instead of creating a licensing program and regulating them.”