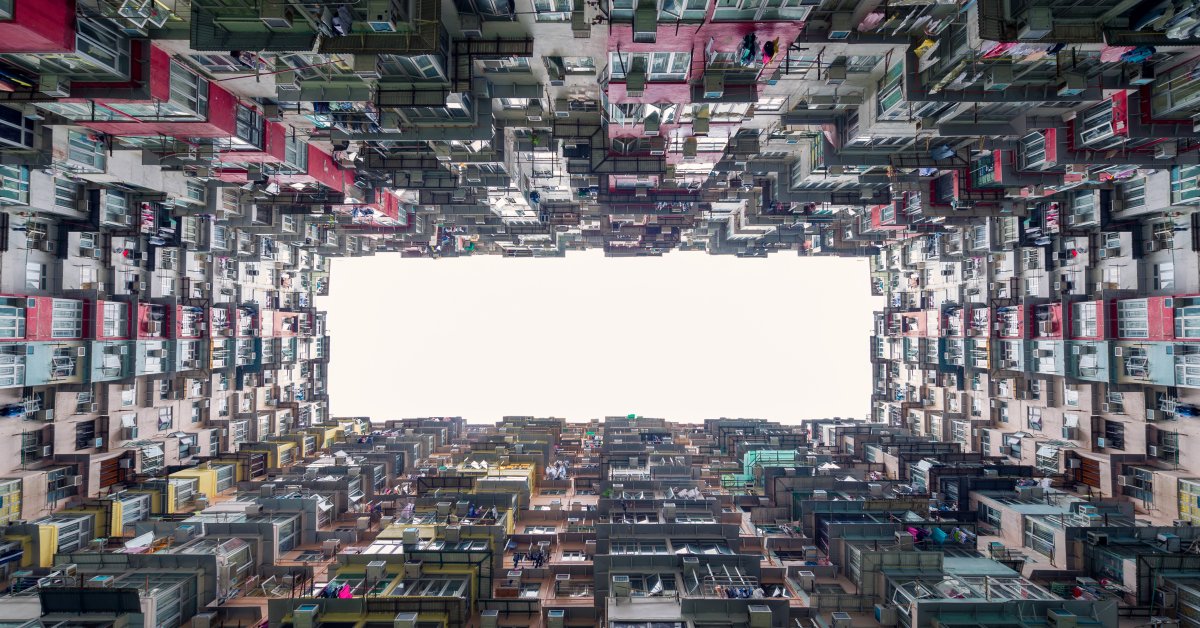 A long, meandering corridor guarded by stale pipes and wires lining the walls separate the 10 cubicles stacked on either side. Their occupants—their faces covered in white masks amid the stifling heat—are squeezed into their tiny, allotted spaces demarcated by utensils, clothes and other mundane personal effects in the neon-lit human pen punctuated with electric fans, leaking sinks, and slices of blocked windows offering a grim vista of the back alley outside. Here, twenty-odd folks share one toilet – a privilege for which a few others next door would pay thrice their rent, just to halve the number of fellow users they have to share their own toilets with.

This is the interior of a 400 square foot flat tucked away in the mezzanine of a dilapidated building in Sham Shui Po—one of the poorest, yet also most rapidly gentrifying regions in Hong Kong, a city known for its sky-high property prices, extreme wealth inequality, free-wheeling capitalism, and more recently, anti-Beijing protests that have met with an even tighter control by China over the region it regained in 1997 from the British who ruled it for over 150 years. As the city marks 25 years of the handover, and finds itself in the center of a global power struggle between the U.S. and China, new concerns have been raised over the city’s shrinking space for civil and political debate and participation. There is far less global outrage at an old problem: its stark inequality. The so-called “cage homes”, like this one in Sham Shui Po, are its most glaring manifestation.

Roughly one in five Hongkongers lived under the poverty line, discounting for government welfare. With welfare support, the official figure is kept at around 8%, which is still more than half a million people. Over 220,000 people live in so-called “subdivided flats”, a dainty euphemism for the 4 by 4 by 6 ft spaces that the city’s poor, downtrodden, disabled, and neglected are crammed into at night. Out of sight, out of mind.

An occupant of a subdivided residential unit located inside a building in Hong Kong, on June 13, 2017.

Yet, many of these tenants are by no means invisible at day. They are, in fact, ubiquitous, cleaning the city’s streets and sewers, loading and unloading its merchandise, waiting on customers at the thousands of restaurants dotting the metro, and manning shop counters and offices. They constitute the army of workers who keep Asia’s financial hub buzzing, but are so poorly paid that they can’t rent, let alone purchase, decently sized apartments. It shouldn’t take $700 a month to pay for the primitive shelter they take refuge in – but in a city where more than half of young adults make less than the median wage and it takes on average six years for a family to be allocated public housing, living with dignity—or some semblance of it—doesn’t come cheap.

In the subconscious of some of the city’s more privileged citizens lies the conception that cage homes – and their residents – belong to a fundamentally different Hong Kong, one that is both alien and non-existent. One that should be distanced from and pitied in equal parts – as the news cycle lusts for flashier and more excitable narratives of the city: whether it be its status as a financial and commercial gateway for China, or its persisting symbolism as a geopolitical fault line between two competing ideologies. In the eyes of many who have long benefited from Hong Kong’s excesses, radical poverty is a fait accompli. As it is for those who toil away at day and sleep in shoeboxes at night.

Hong Kong has a housing crisis—one that stems not from a dearth of supply per se but from a lack of affordable housing. It would take 23.2 years for someone earning the median gross household income—with no expenditure—to be able to afford a median-priced apartment. The consequences are dire: youths raised to see little to no prospects for social mobility, with their childhoods spent in suffocating space-lessness; retirees living on meager benefits dying alone, an issue compounded by the ongoing pandemic and lack of medical support for cage-home residents. I spent two months this year seeking to raise emergency funds and medical supplies for tenants in cage homes in Tsuen Wan and Kwai Chung, districts hit by the first mass lockdowns under the deadly fifth wave of the pandemic. The social support residents received was minimal at best.

How did we get here? There’s no simple explanation—neither those who attribute the crisis to speculative investors from the Chinese mainland with little to do with the unaffordability of the lower-end of the property market; nor those who trot out “unbridled capitalism” for everything, get it. To understand Hong Kong’s present malaise, we must turn to history.

In 1972, the British colonial administration sought to expand Hong Kong beyond the already highly urbanized regions of Hong Kong Island and Kowloon. The New Territories—the vast swathe of rural, low-density land lying to the north of the city—was a natural site for development. In seeking to court Indigenous villagers, the administration implemented the Small House Policy, which would guarantee government funding and land provision for every indigenous male villager to build one house. Inherited by the post-handover Hong Kong government, this policy only served to constrict the supply of developable lands for non-indigenous residents. In 2017, the city’s outgoing chief executive, Carrie Lam, called for a “reasonable resolution to the issue”. A new modus vivendi, balancing all parties’ interests, is very much the need of the hour.

Residential units clustered tightly together in an apartment complex in the Quarry Bay area of Hong Kong.

Blame should not rest with indigenous villagers, who are as much part of the city as its other citizens. Instead, responsibility ought to remain with those who can and must resolve conflicts of interests through political acumen. Since Sir Haddon-Cave’s tenure as the city’s financial secretary in the late 1970s, the city’s administration had by and large adhered to “positive non-interventionism” as its guiding fiscal ethos.

With its spectacular attractiveness for foreign capital and businesses propped up by its minimal taxes and robust legal infrastructure, successive governments, even after the 1997 handover, eschewed proactive designing of industrial policy in favor of the market. The policy has generated 10-20% of government revenue over the past decades directly from land sales by the government.

The problem is structural, and should not be individualized through vilification of particular bureaucrats or officials. Nor, indeed, should it be reduced into Manichean lenses—blaming property developers and the civil service for creating the crisis. The blame game may suit those with a political agenda, but does little in ameliorating the suffering of those who desperately need a ladder out of deeply entrenched poverty.

Read more: One Country, Two Systems’ Is Still the Best Model for Hong Kong, But It Badly Needs Reform

Much could be done. Long-term solutions aimed at improving supply of public housing—with the aim of empowering tenants to become home-owners eventually, have been extensively touted. In the short- to medium-term, constructing compact yet well-maintained, humane, and hygienic transitory housing and doubling down on rent controls and subsidies would also help. Empowering understaffed yet highly devoted community organizations and associations with financial wherewithal and resources could rekindle public-private partnerships in a city where trust in government has been gravely challenged in recent years. More fundamentally, we need a robust education and employment safety net designed to provide a viable ladder out of structural poverty for those who find themselves in the city’s dark underbelly. As the city looks toward a new administration on the 25th anniversary of its handover, the time for transformative action to aid its poor has never been more ripe.

There are few lies in Hong Kong that are older and sweeter than the one local proverb, “If you work long and hard at it, you’ll get to own your own house.” That’s the stuff of dreams, actually. As I think about those faces in the neon-lit, claustrophobic corridors I walked during the COVID-19 pandemic, I am reminded of two lines from Wilfred Owen’s Dulcet et Decorum Est: “In all my dreams before my helpless sight/He plunges at me, guttering, choking, drowning.”