Chinese authorities raised the number of people confirmed dead in a building collapse to 26 on Thursday, nearly a week after the block containing apartments, a hotel and a cinema caved in and emergency workers launched a massive rescue operation to pull out survivors.

The commercial building in central Changsha city collapsed on Friday, with officials saying that “currently 10 trapped people have been rescued and 26 people were discovered dead,” state broadcaster CCTV said.

The tenth person pulled alive from the rubble just after midnight on Thursday had been buried in debris for nearly six days.

She was conscious during her rescue and even advised rescuers on how to bring her out safely, official news agency Xinhua reported.

The flattened structure, which has left a gaping hole in a dense Changsha streetscape, created a mess of debris and crumbled concrete beams.

The confirmed number of dead from the collapse had previously been five. More people are still believed to be missing in the debris.

Another woman who survived around 88 hours in the debris told state media that she was studying on her bed at the time of the collapse and managed to stay alive by holding on to a small amount of water and using her quilt to keep warm.

Rescuers have been able to find live victims with the help of sniffer dogs, life detectors and drones, as well as shouting and knocking survivors, according to Xinhua. 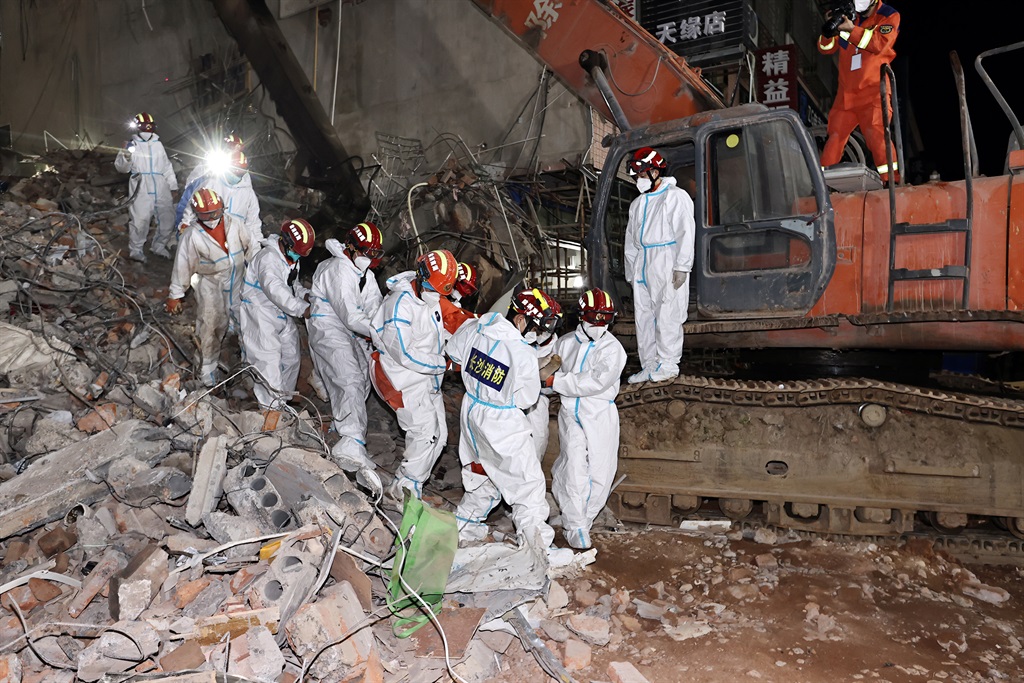 CHANGSHA, CHINA – MAY 05: Rescuers carry the 10th survivor at the collapse site of a self-constructed residential building on May 5, 2022 in Changsha, Hunan Province of China. The 10th survivor was rescued about 131 hours after the collapse occurred on Thursday. (Photo by VCG/VCG via Getty Images)

Eleven people – including the building’s owner and a team of safety inspectors – have been detained in connection with the collapse, including two people suspected of engaging in “illegal alteration” of the building, according to Changsha authorities.

Officials have alleged that surveyors falsified a safety audit of the building.

On Thursday, Xinhua said the building was a “self-built residential structure”.

President Xi Jinping earlier called for a search “at all cost” and ordered a thorough investigation into the cause of the collapse, state media reported.

A top Communist Party official was also dispatched to the scene – an indication of the severity of the disaster.

Building collapses are not uncommon in China due to weak safety and construction standards, as well as corruption among officials tasked with enforcement.

In January, an explosion triggered by a suspected gas leak brought down a building in the city of Chongqing, killing at least 16 people.

Twenty-five people also lost their lives in June 2021 when a gas blast hit a residential compound in the city of Shiyan.

The same month, 18 people were killed and more injured when a fire broke out at a martial arts school, with state media reporting that all the victims were boarding school pupils.