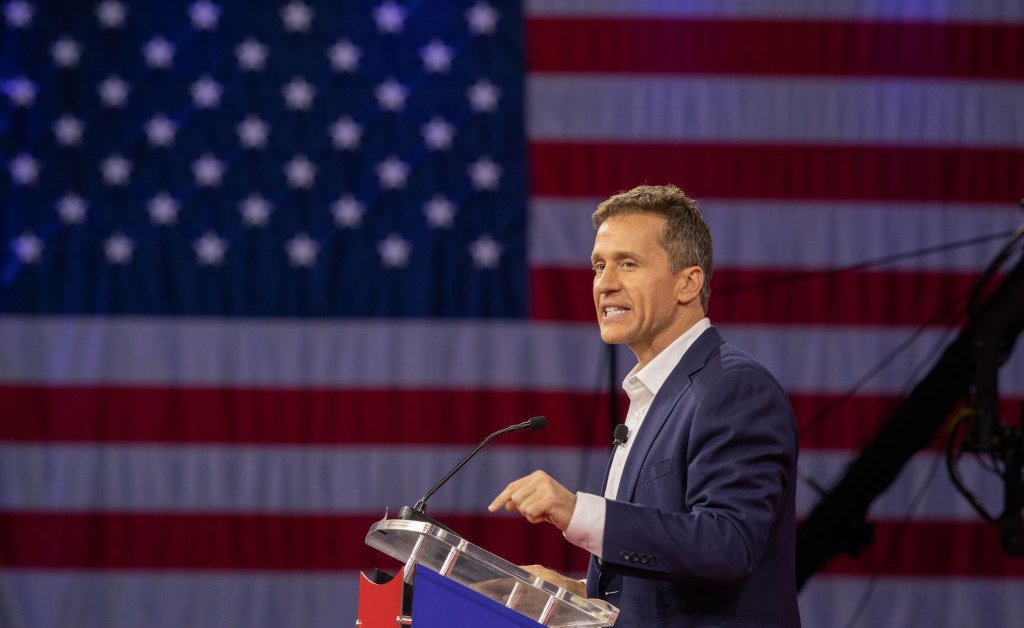 There’s always been something a little pathetic with how Eric Greitens publicizes himself. After the Osama bin Laden raid, he went on cable show after cable show, hawking his memoir and explaining how SEALs like himself operate, but always forgetting to mention that he’d never actually served with a SEAL team in combat. Later, when he ran ads for Governor in Missouri, he again highlighted his SEAL background despite pushback from the SEAL community over how they felt he was misrepresenting himself. He succeeded in that campaign, only to lose the governorship amid allegations of blackmail, campaign finance violations, and felony invasion-of-privacy charges. But now that he’s running for Senate, he’s reached a sad nadir with his latest ad, in which he leads a gun-toting, camouflage-wearing team into a suburban house to go “RINO hunting,” in other words, hunting and killing Republicans who aren’t sufficiently hardline. You can even purchase a “RINO hunting permit” on his website for $25. Playing with advocating political violence is clearly an attempt to generate horrified backlash, and perhaps to distract from recent allegations from his ex-wife that Greitens abused her and their children.

But Greitens has a long history of successfully leveraging American attitudes toward the military in service of his own projects, first in the nonprofit world, and then in politics, and so what’s interesting about his recent campaigning is not what it says about him as a candidate, but about what he thinks his constituency wants from former Navy SEALs. And it isn’t defending American from foreign terrorists.

He’s also not alone. During the Senate campaign in Georgia, Texas House Representative Dan Crenshaw cut a much more expensively produced ad in the style of a Marvel movie where, after jumping from a helicopter, he lands on a car in Georgia filled with two members of Antifa, and proceeds to attack them. The cringe inducing performance shared similar images of militarized politics and a hatred of domestic rivals (though this flirtation with violence didn’t help him when a group of far right protesters, shouting “Eyepatch McCain,” assaulted his campaign staff at Republican Party of Texas).

It’s a common enough thing, in the wake of failed wars, such as Iraq and Afghanistan, for people to look for internal enemies. “We were stabbed in the back” has been the rallying cry of so many disappointed veterans through the centuries. “This feeling pours out into a state of general indictment,” wrote German World War I veteran Ernst Junger in 1932, “into a literature of the blind, who are constantly in search of those responsible.” When things go awry in your country, you either have the fortitude to look in the mirror, or you hunt for scapegoats.

Greitens used to take a different approach. In the first decade of the post-9/11 wars, he spoke of selfless service and a commitment to rebuild American communities. He’d tell a story of visiting amputees and burn victims at the National Naval Medical Center in Bethesda, Maryland, veterans who had been thanked repeatedly for what they’d done for their country but, in his telling, were energized by four simple words: “We still need you.” He went on to found a nonprofit that “redeployed” veterans to their communities to work on service projects, and he spoke at Harvard about how as a country “we need to connect with people and tell them that they are needed” to serve.

In the second decade of the wars he decided to run for governor as a Republican, and he brought a harder edge to his use of his service. Gone was the sophisticated, service-minded intellection. Instead, he cut ads shooting guns and blowing things up while selling bumper stickers reading “ISIS Hunting Permit” and bragging, “Liberals will go crazy when they see these.” This earlier version of his current RINO hunting permits was crass trolling as well, though at least it directed itself toward genocidal terrorists. But overseas military failures have left little taste for that kind of bluster on the newly isolationist right, and so the fantasy he’s selling now is violence toward fellow Americans.

Greitens and Crenshaw, both former Navy SEALs, are leaning heavily on their backgrounds, though that doesn’t mean they’re representative of veterans as a whole. A recent survey of the civic health of veterans (done in partnership with Greitens’ old nonprofit, The Mission Continues) found that not only do veterans vote and volunteer more than the civilian population, but that they had improved on these metrics in the past half decade, a change driven by younger veterans. That call to service which Greitens used to champion drives many of us more than ever, no matter how far Greitens has fallen away from the values he used to profess.

What Greitens and Crenshaw are doing is less indicative of a military mindset, then, than a kind of playacting for civilians who like the iconography of the military, but without the tricky-to-uphold military values and nonpartisan commitment to the nation. Let’s toy with the thrill of violence, but do it with a smirk that dares you to be enough of a rube to take it seriously.

No, I don’t take it seriously. I take it as an expression of a lack of talent, an inability to genuinely inspire people. After the Second World War, the Ukrainian-born writer Vasily Grossman once argued that “the superman is born of the despair of the weak, not from the triumph of the strong.” A commitment to social equality and the creative force of the people speaks to self-confident strength. It is the vicarious despair of impotence which confuses violence for strength and sees “the man sowing a vast wheat field as inferior to the thug who smashes him over the back of the head with crowbar.”

Is this really what Americans want? Greitens is currently leading in the polls, so his schtick, however embarrassing, clearly has an audience. And even outside of these two egregious examples, contempt has replaced disagreement in far too much of our political discourse.

It’s fun to imagine destroying your enemies, but hard putting in the work to build a better country and better future. Ads like Greitens are made for the weak and humiliated, who want to fantasize about violence without having the guts to admit that’s what they’re doing. I don’t think Americans are a pathetic people. But we are hurting. And it’s in times like this when candidates show us whether they’re capable of moral leadership.