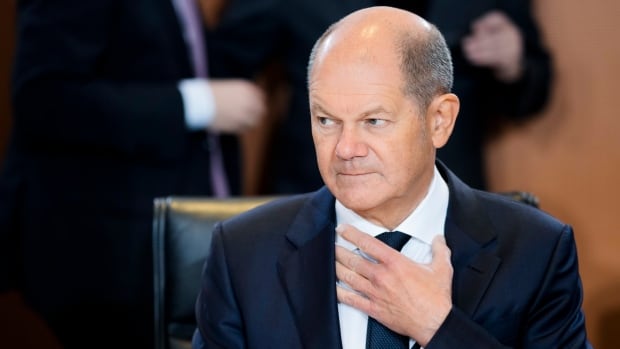 The German government has confirmed it will provide Ukraine with Leopard 2 battle tanks and approve requests by other countries to do the same.

Chancellor Olaf Scholz said Wednesday that Germany was “acting in close co-ordination” with its allies.

The long-awaited decision came after U.S. officials said a preliminary agreement had been struck for the United States to send M1 Abrams tanks to help Kyiv push back Russian forces entrenched in the east almost a year since the start of the war.

By getting Washington to commit some of its own tanks Berlin hopes to spread the risk of any backlash from Russia.

Ekkehard Brose, head of the German military’s Federal Academy for Security Policy, said tying the United States into the decision was crucial, to avoid Europe facing a nuclear-armed Russia alone.

WATCH | Ukraine controls about 30% of Zaporizhzhia region ahead of potential escalation:

On the Ukrainian frontlines in Zaporizhzhia

CBC’s Chris Brown joins Ukrainian soldiers in Zaporizhzhia, Ukraine, to witness first-hand the war efforts to push back on Russia’s presence there. Military experts say the region is likely the next big battle of the war, as it’s important to both countries.

But he also noted the deeper historic significance of the decision.

“German-made tanks will face off against Russian tanks in Ukraine once more,” he said, noting that this was “not an easy thought” for Germany, which takes its responsibility for the horrors of the Second World War seriously.

Members of Scholz’s three-party coalition government welcomed the news ahead of the official announcement.

Marie-Agnes Strack-Zimmermann, a member of the Free Democratic Party who chairs the parliamentary defence committee, said the news was “a relief for a mistreated and brave Ukraine.”

Strack-Zimmermann had been one of the loudest voices calling for a swift decision on arms supplies to Ukraine.

The far-right Alternative for Germany (AfD) and the Left party, each with current or historic links to Russia, were critical of the decision.

“Germany risks being drawn directly into the war as a result,” said AfD co-leader, Tino Chrupalla.

“The supply of Leopard battle tanks, which ends a further taboo, potentially takes us closer to a third world war than in the direction of peace in Europe,” Left parliamentary Leader, Dietmar Bartsch, told German news agency dpa.

Kremlin spokesperson Dmitry Peskov described German and U.S. intentions with the tanks as a “a rather disastrous plan.”

“I am convinced that many specialists understand the absurdity of this idea,” Peskov told reporters Wednesday.

Peskov predicted “these tanks will burn down just like all the other ones…. Except they cost a lot, and this will fall on the shoulders of European taxpayers.”

Abrams approval a reversal for U.S.

U.S. officials said details are still being worked out on sending the Abrams, which represents a reversal for Joe Biden’s administration.

Much of the aid sent so far in the 11-month-old war has been through a separate program drawing on Pentagon stocks to get weapons more quickly to Ukraine. But even under that program, it would take months to get tanks to Ukraine and to get Ukrainian forces trained on them. It wasn’t clear Tuesday how soon the U.S. will start training Ukrainian troops on the Abrams and roughly how soon they can get to the battlefront.

Until now, the U.S. has resisted providing its own M1 Abrams tanks to Ukraine, citing extensive and complex maintenance and logistical challenges with the high-tech vehicles, the requisite training and the sustainment of the tanks. The official also said that the administration believes that such plans are now in place, but it could take time to implement them.

At the Pentagon, spokesman Brig. Gen. Pat Ryder said Tuesday he had nothing to announce on any U.S. decision regarding Abrams tanks. But he said, “anytime that we’ve provided Ukraine with a type of system, we’ve provided the training and sustainment capabilities with that.”

The administration’s reversal comes just days after a coalition of more than 50 senior defence officials from Europe and beyond met in Germany to discuss Ukraine’s war needs, and battle tanks were a prime topic.

While several House Republicans in Congress have objected to the amount of military aid dispensed to Ukraine since the Russian invasion began last Feb. 24, Senate Republican Leader Mitch McConnell said Tuesday “it’s time, past time” for the Biden administration and allies to send more military aid to Ukraine, and that the U.S. must provide more tanks and weapons to help Ukraine “win this war.”

“It’s time, past time, for the Biden administration and our allies to get serious about helping Ukraine finish the job and retake their country.”

Ukrainian President Volodymyr Zelenskyy made clear late Tuesday that he hoped to receive a more substantial number of tanks from Western allies.

Wagner Group is a private army that’s been violently advancing Russian interests internationally – but in the shadows – for years. Now as Russia’s invasion of Ukraine has stalled, the fighters-for-hire have taken centre stage to fight on Russia’s side. The mercenaries have been involved in some of the bloodiest battles of the entire war. Mary Ilyushina is a reporter covering Russia for the Washington Post. Today on Front Burner, she joins guest host Jodie Martinson to explain the evolution, and growing influence, of the Wagner Group in Russia and other parts of the world.