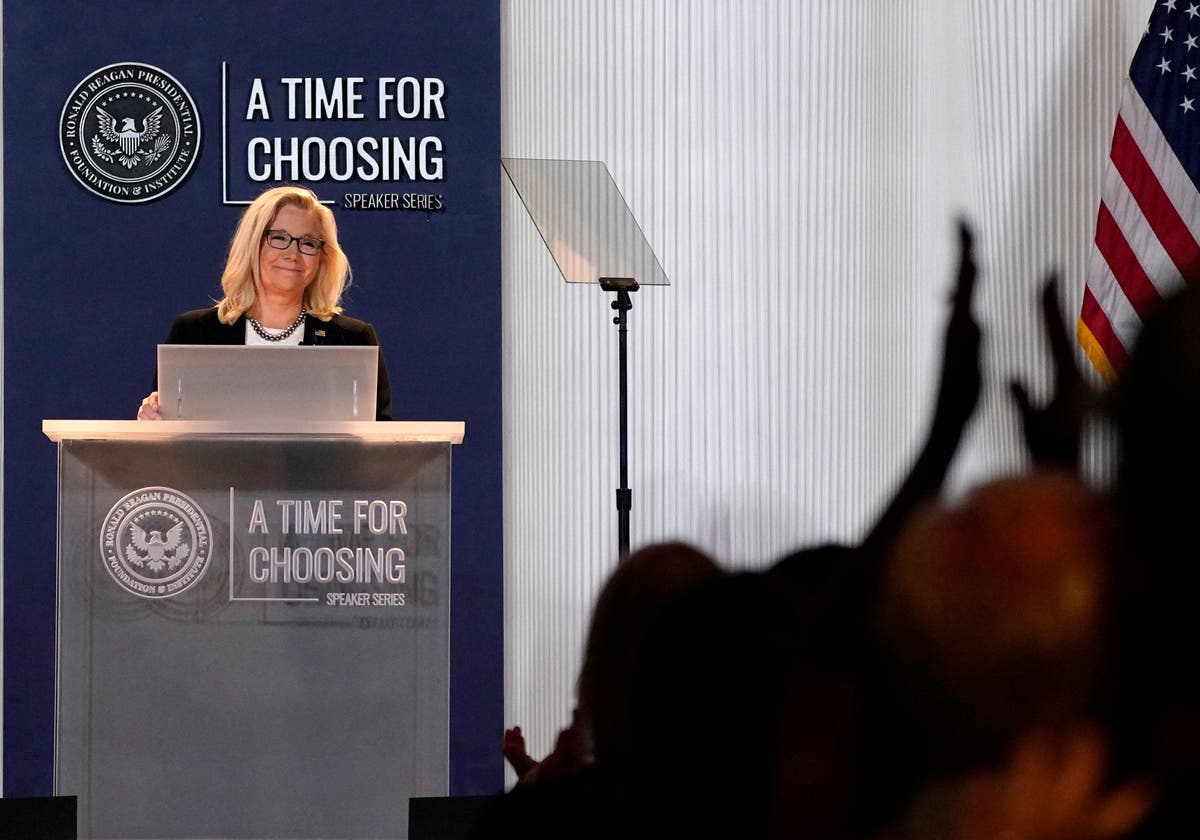 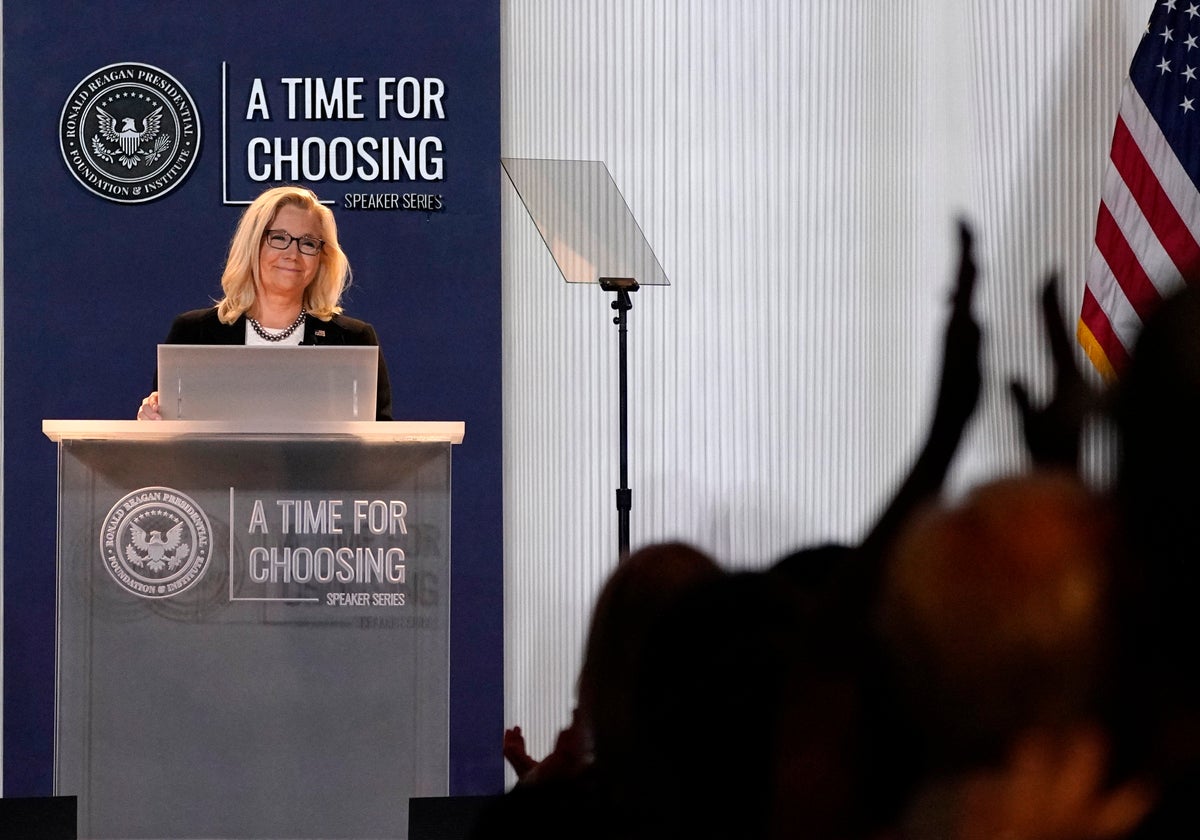 Republicans cannot be loyal to both Trump and constitution, says Liz Cheney

Ms Cheney, who is the vice-chair of the House committee investigating the 6 January riots, said Mr Trump’s efforts have turned out to be “more chilling and more threatening” than first imagined as the full picture is emerging.

“Republicans cannot both be loyal to Donald Trump and loyal to the Constitution,” she said, to a round of applause.

She said Americans are confronting a “domestic threat” like never before and Mr Trump attempted to unravel the foundations of the constitutional Republic.

She praised former White House aide Cassidy Hutchinson and others who are testifying against Mr Trump for their “bravery and her patriotism”.

In the first action since Ms Hutchinson’s explosive testimony, the panel subpoenaed Trump’s White House counsel Pat Cipollone, whose resistance to Mr Trump’s false claims has made him a long-sought witness.

Capitol Police Sergeant calls on Mike Pence to testify: ‘Your boss tried to have you killed’

US Capitol Police Sgt Aquilino Gonell told HuffPost that Donald Trump is responsible for the injuries he sustained during the attack on Congress.

Speaking about the events on January 6, Sgt Gonell tweeted on Tuesday: “When [Trump] tweeted about Pence, the fighting in the tunnel intensified. We held the line hoping the President would be on our side and send us help. Mike Pence is lucky to be alive, he’s lucky we kept our OATH AND HELD THE LINE. Your boss tried to have you killed. Testify.”

The testimony of former Trump White House aide Cassidy Hutchinson has exposed the widening rift between the Justice Department and congressional investigators.

Some of the officials of the Justice Department, according to a New York Times report, felt blindsided and were left astonished with the explosive testimony as the panel did not provide them with videos or transcripts of her taped interviews with committee members beforehand.

The surprise hearing came as a parallel investigation is going on by the federal prosecutors to determine the extent of the former president’s involvement in the riots and it will soon converge.

The committee members have also suggested that Attorney General Merrick B Garland is not moving swiftly enough in investigating leads. But Senior Justice Department officials say that committee members’ resistance to turn over transcripts has slowed their progress.

Liz Cheney: Republicans cannot be loyal to both Trump and constitution

In her speech that drew a standing ovation from a room full of GOP, Liz Cheney said that Republicans have to choose between being loyal to Donald Trump or the constitution.

She went on to praise people testifying against Mr Trump, especially young women and White House aide Cassidy Hutchinson for her bombshell testimony on Tuesday.

“And I have been incredibly moved by the young women that I have met and that have come forward to testify in the January 6 committee,” she said.

Regarding Ms Hutchinson she said: “Her superiors — men many years older — a number of them are hiding behind executive privilege, anonymity and intimidation. But her bravery and her patriotism yesterday were awesome to behold.”

“I want to speak to every young girl watching tonight,” the congresswoman concluded. “The power is yours, and so is the responsibility. … These days, for the most part, men are running the world — and it is really not going that well.”

“I want to speak to every young girl watching tonight,” the congresswoman concluded. “The power is yours, and so is the responsibility. … These days, for the most part, men are running the world — and it is really not going that well.”

Liz Cheney called Donald Trump a “domestic threat” of the kind the US has never faced before in her speech at the Ronald Reagan Presidential Library on Wednesday night.

“We are confronting a domestic threat that we have never faced before — and that is a former President who is attempting to unravel the foundations of our constitutional Republic,” said Ms Cheney. “And he is aided by Republican leaders and elected officials who have made themselves willing hostages to this dangerous and irrational man.”

She began the speech by saying: “My fellow Americans, we stand at the edge of an abyss, and we must pull back.”

“As the full picture is coming into view with the January 6 committee, it has become clear that the efforts Donald Trump oversaw and engaged in were even more chilling and more threatening than we could have imagined,” Ms Cheney said.

Meadows pushes back on claim he sought pardon

Speaking on MSNBC on Wednesday, 2012 Obama campaign manager Jim Messina said that “the January 6 hearings have been incredible television. I think they’re way past Watergate. I think they’re doing really big harm to the President and his party with those swing voters”.

“Half of independent voters think the President did something wrong. You’re seeing Republicans sort of walk away from the president this morning … This kind of civil war inside the Republican Party continues,” he added.

‘Of course’: Anita Hill says Ginni Thomas should speak to the Jan 6 Committee

Lawyer Anita Hill, who testified in 1991 that Justice Clarence Thomas sexually harassed her, said on MSNBC on Wednesday that his wife Ginni Thomas should be “compelled” to speak to the January 6 committee.

“Of course I think she should speak to the committee,” Ms Hill said on Andrea Mitchell Reports. “I also think that every other individual who they have identified should be compelled to speak … or have to answer for it under whatever legal protections the committee has.”

He avoided answering if he believes in the peaceful transfer of power.

“It’s really chilling because these are the most basic questions that you could ask somebody about our democracy … I think it shows the depth of the radicalization of aspects of the Republican Party,” Ben Rhodes, Deputy National Security Advisor in the Obama administration, said on MSNBC on Wednesday.

Concerning Tuesday’s witness, Mark Meadows aide Cassidy Hutchinson, Mr Rhodes said: “There are very few people in this country who are better positioned to know what happened on January 6 than Cassidy Hutchinson … She’s beyond a credible witness.”