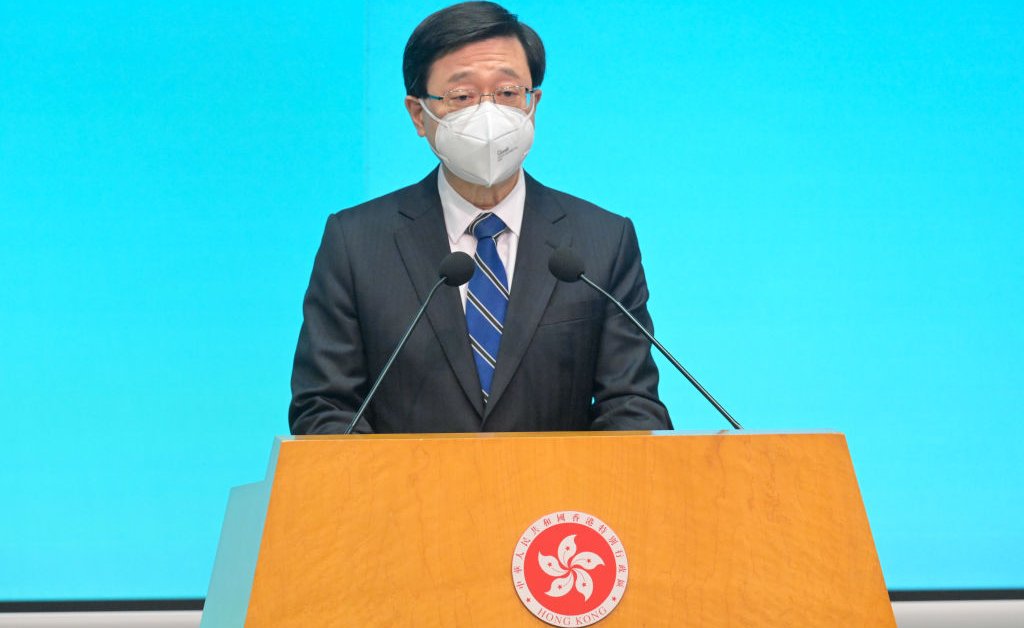 John Lee will become Hong Kong’s new leader on July 1, when he’s expected to be sworn in by Chinese President Xi Jinping.

Lee is the first chief executive to be installed since anti-government protests roiled the city in 2019 and the special administrative region of China underwent a major reform last year, intended to allow only “patriots” to run the city. Lee was the sole candidate to lead the city of 7.5 million. He received more than 99% of the vote in the secret ballot of about 1,400 members of a pro-Beijing election committee.

He’s replacing Carrie Lam, who during her tenure oversaw city’s worst unrest in decades, and a deadly fifth wave of COVID-19 in early 2022 that killed thousands of unvaccinated elderly people—despite two years to prepare for a serious outbreak. A crackdown on dissent and ongoing, draconian zero-COVID restrictions have driven an exodus from the city. Inequality has worsened, and the city’s GDP declined 4% in the first quarter.

Lee, whose term is five years, has promised to usher in a “new chapter” for Hong Kong. Here’s what to know about Lee, and what his leadership might mean for Hong Kong.

Who is John Lee?

Lee has been the city’s chief secretary, one of the most senior officials in the government, since 2021. The 64-year-old, who started his career in the police force, oversaw the crackdown on 2019 anti-government protests.

Lee was sanctioned in 2020 by the U.S. Department of the Treasury for his role in implementing a national security law that has been used to crack down on dissent and for his role in “coercing, arresting, detaining, or imprisoning individuals” under the legislation. Lee said he “scoffed at the so-called sanctions” and has referred to the U.S. as a bully.

In a May meeting with Lee in Beijing, Xi described Lee as “resolute, daring to take responsibility and proactive.”

Steve Tsang, director of SOAS China Institute at the University of London, tells TIME that Lee’s police background implies that he is “used to following and giving orders.”

What has he promised to do?

In April, Lee said that one of his priorities is to enact a local security law—in additional to the Beijing-imposed national security law that was put in place in 2020—to prohibit acts of treason, secession, sedition or subversion against the central government.

The incoming chief executive has also said he’ll try to integrate Hong Kong’s economy with neighboring Guangdong province as part of the Greater Bay Area plan, and deal with inequality and housing issues.

Lee will also seek to repair Hong Kong’s standing as a global financial hub. He has said he’s already working on a strategy to reopen the border, but it remains unclear if the government will make quick or meaningful changes to the 7-day hotel quarantine currently required for incoming travelers, which has frustrated businesses in the city.

What will Lee’s leadership mean for Hong Kong?

Beijing has clearly laid out its expectations for Lee. The State Council’s Hong Kong and Macau Affairs Office, China’s main body for Hong Kong affairs, issued a statement in June setting out goals for the new administration. It called for the new government to ensure Hong Kong’s integration in the mainland’s development, to deal with housing issues and inequality and to bolster its international competitiveness.

When Britain handed Hong Kong back to China in 1997, Hong Kong was guaranteed “a high degree of autonomy” for a period of 50 years under a political model dubbed One Country, Two Systems. That afforded the city plenty of leeway to run its own affairs, including an independent judiciary and freedoms of assembly, the press and speech.

One of Beijing’s goals for Lee is to correctly implement the One Country, Two Systems framework. Tsang, of SOAS, says that prior to the 2019 protests, Hong Kong was treated as a special administrative region in its own right, with the Hong Kong people and the rest of the world taking one interpretation of the One Country, Two Systems framework and a high degree of autonomy. Though Beijing had different views, it tolerated but did not necessarily accept a freewheeling Hong Kong. Following the protests, Tsang says that Beijing will only accept its own interpretation of those terms. Already many of the freedoms in Hong Kong have been impacted by a crackdown following the protests, and Beijing has taken a more active role in managing Hong Kong affairs. Lee was picked by Beijing to implement Beijing’s version, he says. Lee “must have accepted that this is what he will have to do or he must be willing to do so.”

“This makes [Lee] different from all previous chief executives of Hong Kong, who were in principle responsible to both Beijing and to the people of Hong Kong and tried to varying degrees to maintain some pretense of a balance,” says Tsang. “The old Hong Kong ended in Lam’s watch and a new Hong Kong is likely to be fully established under Lee, and it will be one that resembles more of the Mainland, though not made into an extension of Shenzhen.”