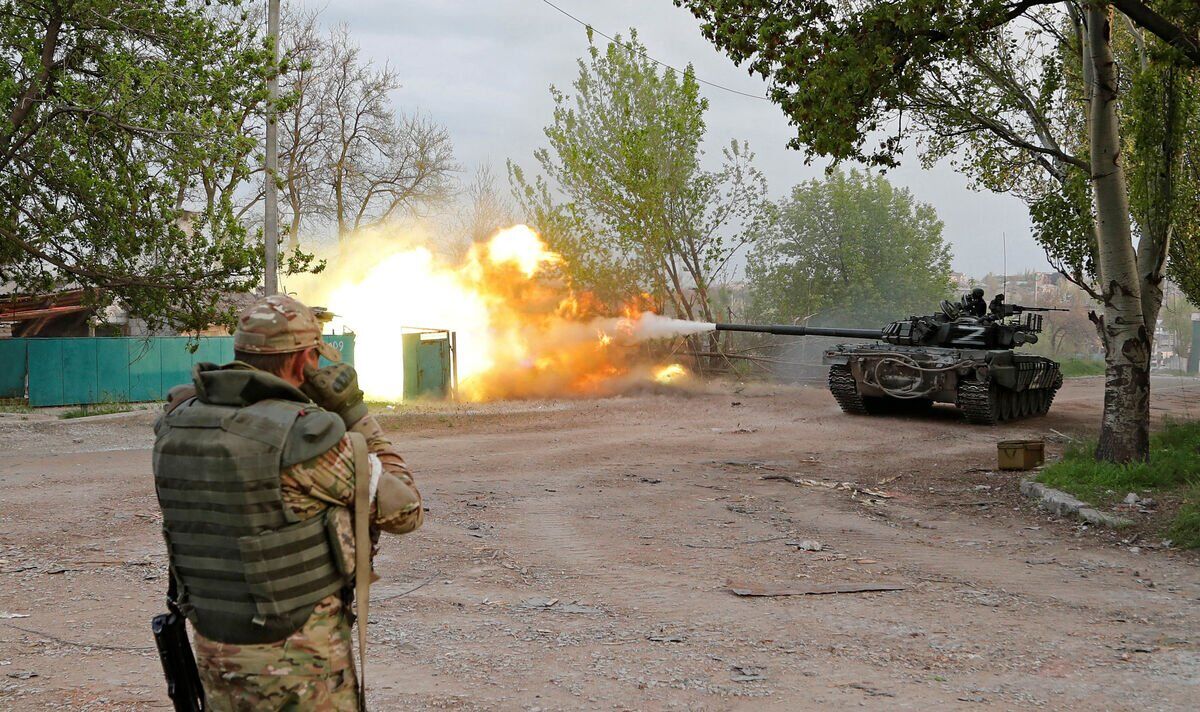 With smoke pouring above the compound, Vladimir Putin’s troops forced their way in for the first time since the struggle for control began. The Ukrainian army said heavily armed Kremlin troops were trying to “destroy” the remaining marines, thought to number 1,500. The steelworks is the last enclave of the city held by President Volodymyr Zelensky’s army.

Securing Mariupol would give Putin a land bridge from the mainland to the Crimean peninsula.

More importantly, it would free up a large number of Russian troops who have previously been pinned down by the defenders in the city.

The beleaguered defending commander from the Azov regiment within the Azovstal steel plant – which has become a symbol of Ukrainian defiance – admitted there were “heavy, bloody battles”.

Lt Col Denis Prokopenko gave no casualty figures in a video update. But he said: “I am proud of my soldiers for making inhuman efforts to contain the enemy’s onslaught.

“I thank the whole world for the tremendous support of the Mariupol garrison. Our soldiers deserve it.

“The situation is extremely difficult, but we continue to carry out the order to keep the defence despite everything.”

President Zelensky appealed to the head of the United Nations to help save the civilians – thought to number 200, including 30 children – and wounded troops at the plant.

In a phone call he also thanked Antonio Guterres for the successful evacuation earlier this week – which saw more than 156 people taken out.

The civilians, many of whom are relatives of the soldiers defending the plant, are hunkering down in tunnels beneath the compound described by one soldier as “hell”. Putin’s commanders yesterday offered the Ukrainian marines a three-day ceasefire to allow the families and non-military civilians to leave.

But still the fighting continued.

Elsewhere, to the west of Mariupol, Ukrainian forces made some gains on the border of the southern regions of Kherson and Mykolaiv. They also repelled 11 Russian attacks in the Donetsk and Luhansk regions, the military said.

More assaults are expected as the invading nation prepares to celebrate Victory Day on Monday, marking the Soviet Union’s defeat of Nazi Germany. The world is watching to see if Putin will use it to declare victory in Ukraine or expand what he risibly calls the “special military operation”.

A declaration of all-out war would allow him to introduce martial law and mobilise reservists.

But the head of Britain’s Armed Forces said he believed the despot was running low on missiles.

Admiral Sir Tony Radakin also claimed Russia had lost 25 percent of all its forces in Ukraine.

He said: “The rate of expenditure and the toughness of the fight is totally different to the one that [Putin] perceived on February 24.”