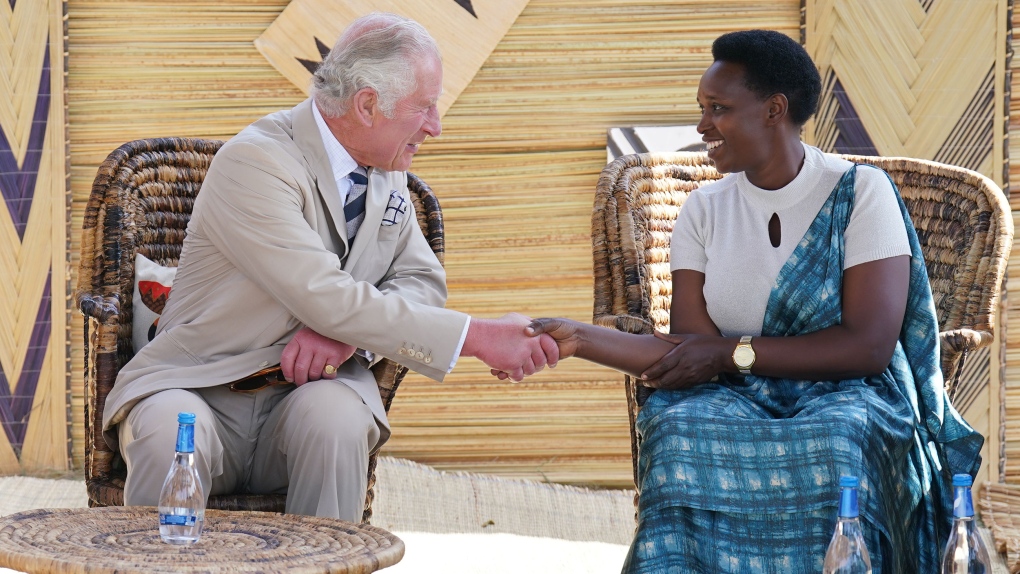 The altar of Nyamata Church is draped with a bloodstained cloth. Its pews are gone; in their place stand rows and rows of clothing and personal effects which belonged to the people massacred here 28 years ago. The roof above is peppered with holes caused by shrapnel, after perpetrators in the killings threw grenades into the building.


In 1994, Hutu extremists in Rwanda targeted minority ethnic Tutsis and moderate Hutus in a three-month killing spree that left an estimated 800,000 people dead, though local estimates are higher.


In the basement below the church — which today stands as a memorial to the 1994 genocide — the skulls of unidentified Tutsi men are suspended above the coffin of a woman from the same ethnic group who died following an act of barbarous sexual violence.


Attackers targeted churches like this one, on the outskirts of the capital Kigali. More than 10,000 people were killed here over two days, according to the memorial’s manager Rachel Murekatete. A mass grave behind the building is the final resting place of more than 45,000 people from the surrounding area killed in the violence.


Prince Charles appeared visibly moved as he was shown around the church grounds, where even now bodies discovered elsewhere are being brought, as former attackers identify other gravesites as part of the reconciliation process that began in 1999.


The heir to the British throne is in Rwanda for a Commonwealth leaders’ summit later this week.


After being shown the grave site, the 73-year-old royal laid a wreath in honor of the victims buried here. On its card, a note from the royal written in the local Kinyarwanda language: “We will always remember the innocent souls that were killed in the Genocide Against the Tutsi in April 1994. Be strong Rwanda. Charles”


The royal then visited Mbyo reconciliation village, one of eight similar villages in Rwanda, where survivors and perpetrators of the genocide live alongside each other. The perpetrators publicly apologize for their crimes, while survivors profess forgiveness.


The first day of his visit to Rwanda was heavily focused on learning more about the massacres nearly three decades ago. Rwandan footballer and genocide survivor Eric Murangwa had encouraged the prince to include Nyamata during his three-day visit to the country.


“We are currently living in what we call ‘the last stage of genocide’ which is denial. And having someone like Prince Charles visiting Rwanda and visiting the memorial … highlights how the country has managed to recover from that terrible past,” he told CNN earlier this month during a Buckingham Palace reception celebrating the contributions of people from across the Commonwealth.


Earlier Wednesday, Prince Charles and Camilla, Duchess of Cornwall met Rwanda’s President Kagame and first lady Jeannette Kagame and visited the Kigali Genocide Memorial and museum at Gisozi, where a quarter of a million people are interred.


“This memorial is a place of remembrance, a place where survivors and visitors come and pay respect of the victims of genocide against Tutsi,” says Freddy Mutanguha, the site’s director and a genocide survivor himself. “More than 250,000 victims were buried in this memorial and their bodies were collected in different places … and this place [has] become a final destination for our beloved ones, our families.”


Those families include his own, who once lived in the city of Kibuye in the country’s western province.


Mutanguha told CNN he heard as attackers murdered his parents and siblings during the genocide, saying: “I was in hiding but I could hear their voices actually until they finished. I survived with my sister, but I lost four sisters as well.”


Keeping their memory alive is now what drives his mission at the memorial.


“This is a very important place for me as a survivor because apart from being where we buried our family, my mom is down here in one of the mass graves, it’s a home for me, but also [it’s] a place where I work and I feel that responsibility. As a survivor I have to speak out, I have to tell the truth of what happened to my family, my country and to the Tutsi people,” he continues.


Mutanguha was keen to welcome Prince Charles to learn more about what happened here and help counter a growing online threat from genocide deniers, which he compares to holocaust denial.


“That’s what actually concerns me because when the Holocaust happened, people didn’t learn from the past. When the genocide against Tutsi happened, you can see the deniers of the genocide … mainly those who committed genocide — they feel they can do it again because they didn’t finish the job. So, me telling the story, working here and receiving visitors, probably we can make the ‘never again’ the reality.”


A spokesperson for Clarence House said the royal couple were struck by how important it is to never forget the horrors of the past. “But also were deeply moved as they listened to people who have found ways of living with and even forgiving the most appalling crimes,” they added.


Prince Charles arrived in Rwanda on Tuesday night — the first member of the royal family to visit the country. He is in Kigali representing the Queen at the Commonwealth Heads of Government Meeting (CHOGM).


The meeting is usually held every two years but was rescheduled twice due to the pandemic. It is the first CHOGM he is attending since being selected as the organization’s next head at the 2018 gathering.


However, the royal trip to Kigali comes at a somewhat awkward time as a furor over the U.K. government’s radical plan to send asylum seekers to Rwanda has erupted back home.


Britain’s government announced the deal with the east African country in April, however the inaugural flight a week ago was grounded after an eleventh-hour intervention by the European Court of Human Rights.


U.K. Prime Minister Boris Johnson is also confirmed to attend the summit of Commonwealth leaders and is expected to meet with Prince Charles on Friday morning.