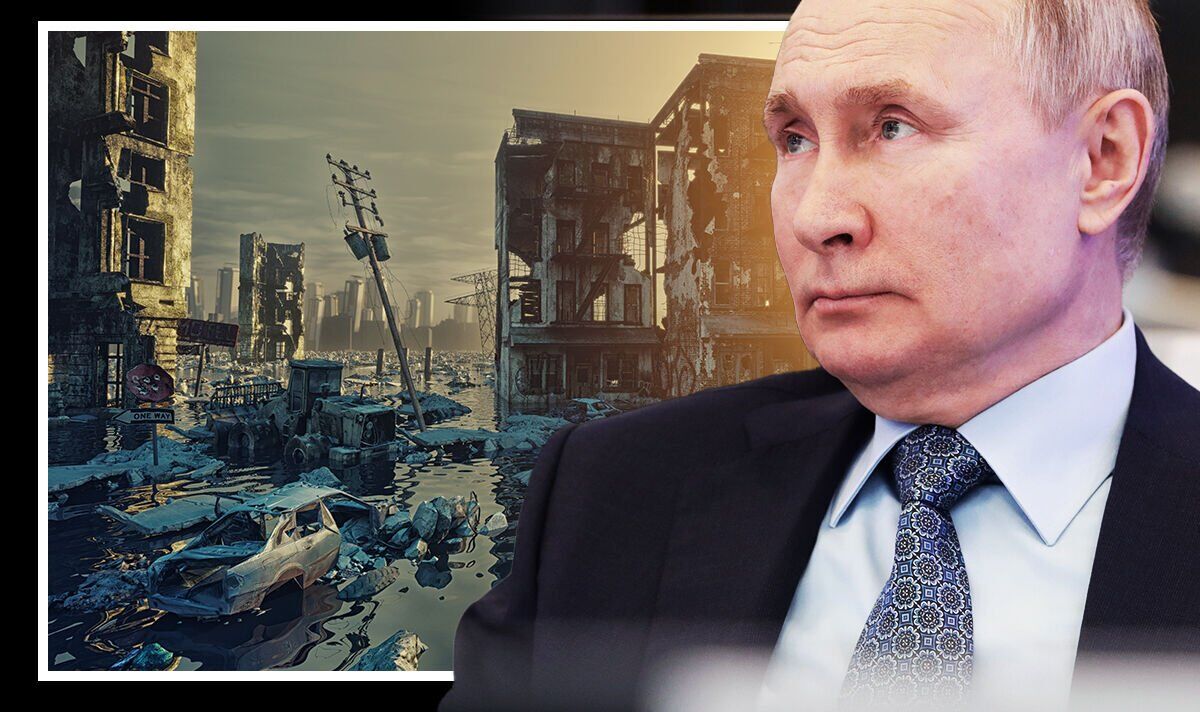 Russian President Vladimir Putin is believed to have around 2,000 tactical nuclear weapons at his disposal, with some even powerful enough to kill tens of thousands of people with a single strike. Since Russia’s invasion of Ukraine on February 24, his troops have been met with fierce and spirited resistance, suffering casualties on the battlefield – including forces and high-ranking military generals. But this has triggered fears Moscow may now turn to using nuclear weapons to get its war plan firmly back on track following its failed campaign.

Dominic Sandbrook, an expert in modern history, wrote in the Daily Mail: “Nuclear weapons are weapons of weakness. The price for using them is so high — not least in risking massive retaliation and the potential destruction of your own civilisation — that no vaguely sane leader would consider it unless his country was facing utter disaster.

“Two months ago, he [Putin] staked his personal credibility, the future of his regime and Russia’s place in the world on the success of his Ukrainian invasion, a gamble he may well be losing.

“One plausible scenario is that if the Ukrainians mount a counterattack in the Donbas — and especially if they threaten his grip on Crimea — Mr Putin might authorise a ‘tactical’ nuclear strike, using short-range weapons devised for use on the battlefield.

“And even somebody as drunk on his own nationalist resentments as Vladimir Putin must realise that a nuclear war would mean the end of Russian civilisation — the end of Moscow, St Petersburg and everything he and his cronies claim to revere.”

The launch of a tactical nuclear weapon is a terrifying prospect as it would “cause all horror of Hiroshima” on a “smaller scale”, according to the journal Scientific American.

It said: “A tactical nuclear weapon would produce a fireball, shock waves, and deadly radiation that would cause long-term health damage in survivors.

“Radioactive fallout would contaminate air, soil, water and the food supply (Ukrainians are already familiar with this kind of outcome because of the disastrous meltdown of the Chornobyl nuclear reactor in 1986).

“No one knows if using a tactical nuclear weapon would trigger a full-scale nuclear war. Nevertheless, the risk of escalation is very real. Those on the receiving end of a nuclear strike are not likely to ask whether it was tactical or strategic.”

He chillingly posted: “There is more and more talk about nuclear weapons, and Russia has much to say about it. We have a solution for Ukraine.

“There are several, yet we are getting reminded about the last resort – nuclear weapons.

“If no-one is going to hear us, and 40 countries keep helping the Ukrainian neo-Nazis, we will have no way back.’

The Kremlin mouthpiece added: “The Americans used nuclear weapons in Japan, in a demonstrative way.

“So us, Russians, will have to demonstratively do it in Ukraine to remove the issue with further confrontation with those known 40 countries.

“A crater the size of several regions will be a clear example of how serious is Russia’s appeal to NATO to get back to peace and harmony. But where will Ukraine go?

“Exactly where it’s heading right now, with the only difference that it’ll be fast, and cheaper for Russia.

“The Europeans and Americans can’t quite get it that one must not harass a neighbouring country with such a giant nuclear potential.

“Thinking about it, I remember just how easily the US used nuclear weapons on Hiroshima and Nagasaki, and how easily they nearly deployed them at Dien Bien Phu in 1954.”