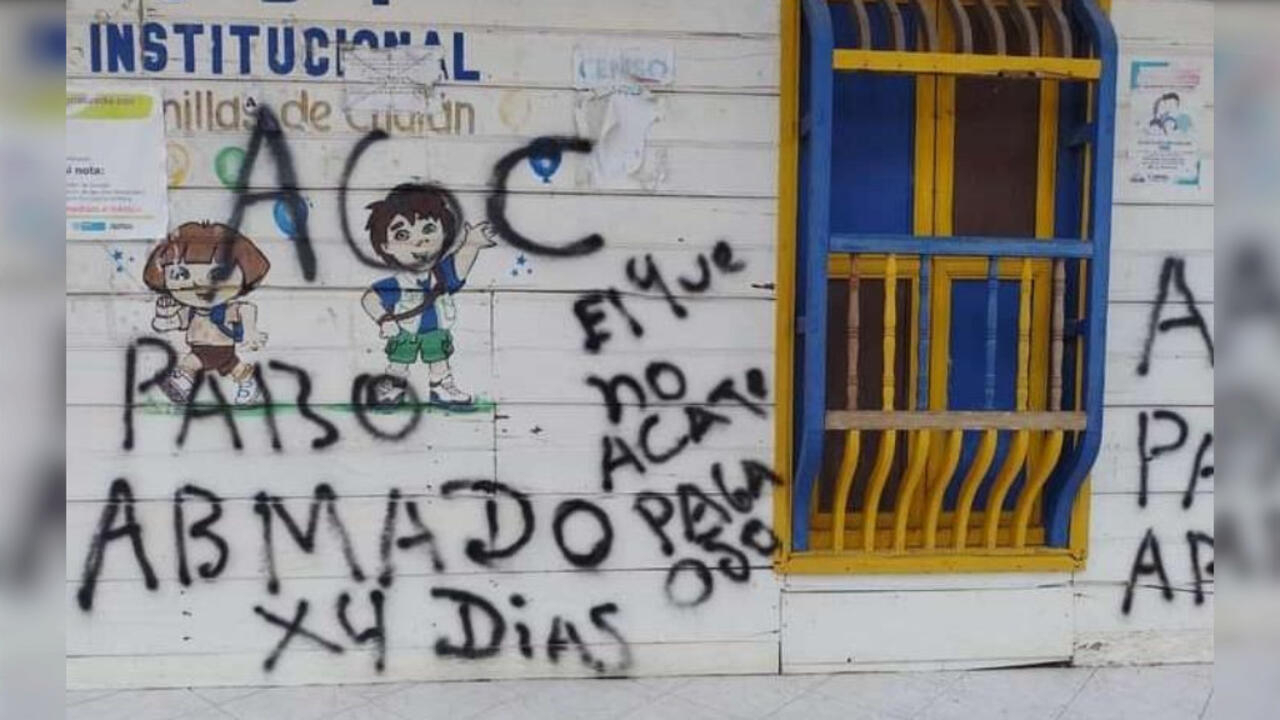 When the powerful drug cartel the Clan del Golfo called an armed strike in early May in response to the extradition of their leader, it shut down a large swathe of northern Colombia. For several days, local people were unable to leave their homes as gang members set cars on fire and carried out a number of assassinations. The strike is now over but it hasn’t brought an end to the wave of violence affecting local people.

On May 4, Otoniel, the chief of the Clan del Golfo cartel, whose real name is Dairo Antonio Usuga, was extradited to the United States after being arrested in October last year. He was considered the largest drug dealer in Colombia over the past few years.

To protest their leader’s extradition, the cartel organised what they called an armed strike, shutting down a large part of northern Colombia. The cartel blocked roads, prevented locals from going to work and otherwise leaving their homes and setting cars on fire. Cartel members scrawled AGC (the other name of the Clan del Golfo, the Autodefensas Gaitanistas de Colombia) in different areas.

They also carried out a shocking number of murders – of police, soldiers and civilians. At least 14 people were killed, according to an NGO called Indepaz, while 24 deaths were reported by the Special Jurisdiction of Peace (in Spanish, JEP or Jurisdicción Especial para la Paz), the transitional justice mechanism through which those who have participated in the Colombian armed conflict are investigated and put on trial.

Streets were deserted in Santiago de Tolú, in Colombia’s Sucre department (geolocation here): “Searching for something to eat, I’m so hungry,” wrote this social media user who seems to have been unluckily trapped in the location while on vacation, on May 5, 2022. The next day, he published a similar video, filmed in the same location.


Cartel members scrawled the AGC logo on this vehicle near the Corozal City Hall in the department of Sucreduring the armed strike.  (geolocation here).

The strike paralysed around a hundred municipalities – including large cities like Montería – in around a dozen departments. In most places, the strike lasted four days.

The NGO Indepaz wrote up this summary of the toll of the Clan del Golfo’s armed strike.

‘If people don’t obey the rules of the Clan del Golfo, they might be targeted or killed’

Alberto (not his real name) works in a village in the Bolivar department. He wanted to remain anonymous for security reasons, like all of the people who spoke to our team.

People in my village stayed hidden in their homes for the four days of the armed strike. There was a climate of fear. I went out just once to try to get some bread. I had to knock on a number of doors because all of the shops were closed. During the whole time I was out, I only saw two or three people. Thankfully, I did have some food stocked up. On the other hand, I ran out of gas to cook with on the fourth day of the strike.

On May 5, members of the cartel burned several motorcycles. They also stopped a car full of people outside of the village. They made the people get out and then they burned the car and shot towards it. I’m guessing that the driver didn’t know about the armed strike – otherwise, he never would have taken the risk of moving around.

Members of the Clan del Golfo cartel burned this car and fired shots towards it after making the passengers disembark in Barranco de Loba in the Bolívar department on May 5, 2022.

The police in our village didn’t do anything during the strike. But there aren’t many of them and I think they have links with Clan del Golfo, anyway.

Many people have criticised the government’s failure to act in the zones affected by the armed strike. Colombian President Iván Duque waited until May 9 to organise a security council to discuss the strike. The government, for its part, says that they have arrested about a hundred men, deployed more than 19,000 soldiers and organised convoys to secure roads during the strike.

Everything has returned to normal since the end of the strike. But the members of the Clan del Golfo cartel remain present in the zone, some are even from this village. Around here, people who own petrol stations or big farms have to send the cartel a monthly contribution, which can be as much as a million pesos [Editor’s note: more than 235 euros, which is equivalent to the minimum wage in Colombia]. Peasants who work growing and transforming coca are also forced to sell their products to the Clan del Golfo for a cheap price. If people don’t obey these rules, they might be targeted or killed. Ahead of the strike, people accused of selling stolen cattle were even killed.

A bus belonging to the Sotrauraba company burns in the Antioquia department on May 5, 2022.

When the armed strike began, streets like this one in Dabeiba, a town in the Antioquia department, were nearly deserted. This video was filmed by a person working in the area.

Andres (not his real name) lives in the sub-region of the Monts de María, in the department of Sucre.

The Clan del Golfo trapped the residents of an entire region for several days – I would have never believed that was possible. That said, the violence has been ongoing for years in the Monts de María zone. There was the Chengue massacre, assassinations…

The violence won’t end until the government decides to invest socially. A lot of young people here are unemployed so they are ready to accept any kind of work that will help them to bring food home. Moreover, the schools are in a derelict state – students sit on the ground and they don’t even have markers to write with. In the health centres, you have to buy the materials yourself, including aspirin or syringes. And a lot of the roads around here are dirt and become practically unusable when it rains. When people are unable to sell their crops, they are lost.

Other armed groups have called for armed strikes in Colombia in the past – like the guerilla group the ELN last February. But analysts agree that they have never seen one as violent or as widespread as the armed strike organised by the Clan du Golfo – a sad fact after the Colombian president declared last October that the arrest of the group’s leader, Otoniel, would “mark the end” of this cartel.