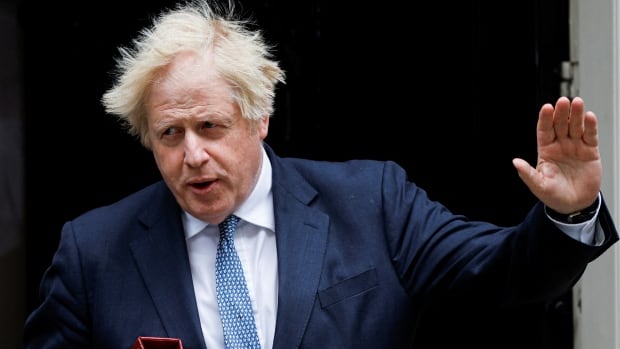 British Prime Minister Boris Johnson has responded to an investigative report on government parties that took place during COVID-19 lockdowns by saying he takes “full responsibility for everything that took place.”

But while the report published on Wednesday said the blame for rule-breaking lies at the top of government, Johnson insisted again that he did not knowingly break any rules. He also ignored calls from opponents to resign.

The prime minister said he was “humbled” and had “learned a lesson,” but that it was now time to “move on” and focus on the government’s priorities.

In her long-awaited report into the “partygate” scandal, senior civil servant Sue Gray said the “senior leadership team … must bear responsibility” for a culture that allowed events to take place that “should not have been allowed to happen.”

Gray investigated 16 gatherings attended by Johnson and his staff in 2020 and 2021 while people in the U.K. were barred from socializing under coronavirus restrictions imposed by Johnson’s Conservative government.

Gray said there had been “failures of leadership and judgment in No. 10,” a reference to the prime minister’s Downing Street office.

“Those in the most junior positions attended gatherings at which their seniors were present, or indeed organized,” she said.

A separate police investigation resulted in 83 people getting hit with fines, including Johnson — making him the first British prime minister ever found to have broken the law while in office. The scandal has led to calls for Johnson to resign.

U.K. Prime Minister Boris Johnson says he has paid a fine from police for attending a lockdown-breaching birthday party in his official residence in 2020. Johnson is the first British leader to be sanctioned for breaking the law while in office.

He previously apologized but insisted he didn’t knowingly break the rules. The British media and opposition politicians have found that hard to square with staff member’s accounts of “bring your own booze” parties and regular “wine time Fridays” in the prime minister’s 10 Downing St. office at the height of the pandemic.

Much of Gray’s 37-page report is devoted to a detailed account of the events, including a May 2020 party in the Downing Street garden to which “the Prime Minister brought cheese and wine from his flat” and a party the following month at which “one individual was sick” and “there was a minor altercation between two other individuals.”

At another party, revellers in the garden broke a swing belonging to Johnson’s toddler son Wilf and partied until 4 a.m.

“Many will be dismayed that behaviour of this kind took place on this scale at the heart of government,” Gray wrote. “The public have a right to expect the very highest standards of behaviour in such places and clearly what happened fell well short of this.”

Critics, some of them inside Johnson’s Conservative Party, say the prime minister lied to Parliament. Ministers who knowingly mislead Parliament are expected to resign.

Johnson has clung on to power so far, partly because Russia’s invasion of Ukraine diverted public and political attention. Some Conservatives who considered seeking a no-confidence vote in their leader decided it would be rash to push Johnson out in the middle of the war, which is destabilizing Europe and fuelling a cost-of-living crisis.

The prime minister got a further reprieve when the Metropolitan Police told him last week that he wouldn’t be getting any more fines even though he attended several events under investigation.

But Gray’s conclusions could revive calls from Conservative lawmakers for a no-confidence vote in the leader who won them a big parliamentary majority just over two years ago. Under party rules, such a vote is triggered if 15 per cent of party lawmakers — currently 54 people — write letters calling for one.

If Johnson lost such a vote, he would be replaced as Conservative leader and prime minister. It’s unclear how many letters have been submitted so far.

Environment Secretary George Eustice defended the prime minister on Wednesday but acknowledged that the “boundary between what was acceptable and what wasn’t got blurred, and that was a mistake.”

“The prime minister himself has accepted that and recognizes there were of course failings and therefore there’s got to be some changes to the way the place is run,” Eustice told Times Radio.