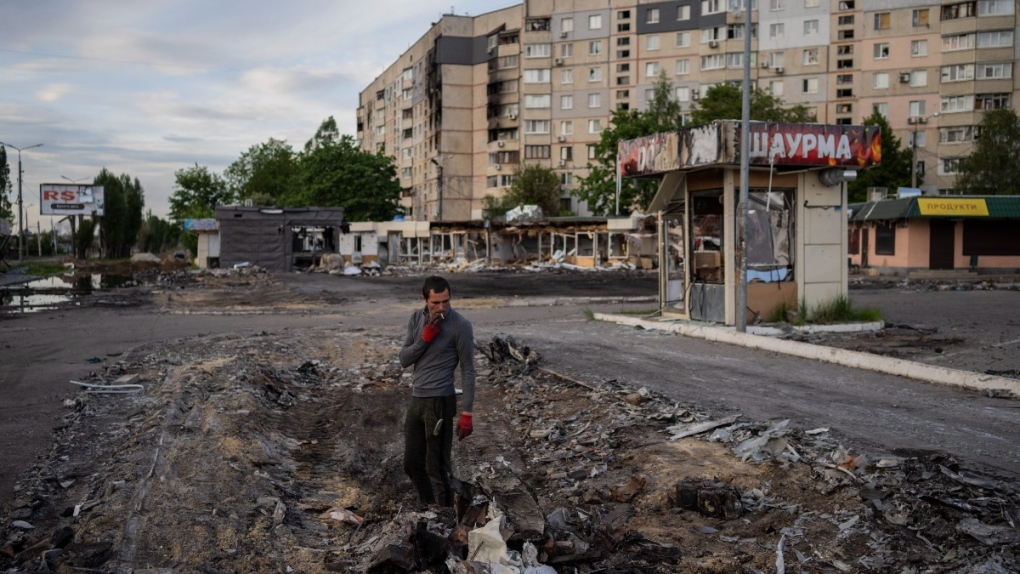 What’s happening in Ukraine today and how are countries around the world responding? Read live updates on Vladimir Putin and Russia’s invasion of Ukraine.


Serhiy Haidai said in a Telegram messaging app post on Friday that 12 people were killed in Severodonetsk as a result of the assault, and more than 60 houses were destroyed across the region.


He added that the attack on Severodonetsk “was unsuccessful – the Russians suffered personnel losses and retreated.” His remarks could not be independently verified.


Ukraine’s General Staff in its morning update on Friday also said that the Russians tried to assault Severodonetsk but suffered losses and retreated.


KYIV, Ukraine — Ukrainian President Volodymyr Zelenskyy thanked the United States for the US$40 billion aid package, which got final congressional approval on Thursday.


“This is a demonstration of strong leadership and a necessary contribution to our common defense of freedom,” Zelenskyy said in his nightly video address to the nation.


He also thanked the European Union for its support.


“And for our partners this is not just an expense or a gift. This is their contribution to security,” Zelenskyy said. “For defending Ukraine also defends them from new wars and crises that Russia could provoke if it is successful in the war against Ukraine. Therefore, we must together ensure that Russia’s aggression against our state has no success, not militarily, economically or any other.”


Zelenskyy said Ukraine’s monthly budget deficit is $5 billion “and so to survive in the war for freedom, we need quick and sufficient financial support.”


The U.S. has announced a shipment of $100 million in military equipment to Ukraine, separate from what will be coming from the $40 billion approved by Congress. The latest package includes 18 more howitzers as well as anti-artillery radar systems, both of which the U.S. has provided to Ukraine already since Russia invaded Ukraine on Feb. 24.


“It is hell there and that’s not an exaggeration,” he said in his nightly video address to the nation. “The brutal and completely senseless bombardment of Severodonetsk. Twelve dead and dozens wounded there in just one day.”


Zelenskyy said Russian strikes on the northeastern Chernihiv region included a terrible strike on the village of Desna, where he said many were killed and rescuers were still going through the rubble.


“The bombing and shelling of our other cities, the air and missile strikes by the Russian army, are not simply military operations in a time of war… It is a conscious and criminal attempt to kill as many Ukrainians as possible,” Zelenskyy said. “To destroy more homes, public sites, businesses. This is what will be qualified as genocide of the Ukrainian people and for which the occupiers will definitely be brought to justice.”


A veteran Russian rock musician faces charges of discrediting the army for remarks made at a concert on Wednesday.


Charges against Yuri Shevchuk, singer for the band DDT, were sent to an administrative court on Thursday. He could face a fine of up to 50,000 rubles (US$800).


After the war began, Russia passed a more severe law making the spread of “fake news” about the conflict punishable by up to 15 years in prison.


During the concert in Ufa, Shevchuk questioned the aims of the war and why young Russians and Ukrainians are fighting and dying in a war that is also costing the lives of civilians.


“Old people, women and children are dying,” he said. “For some kind of Napoleonic plans of our latest Caesar, yes?”


“The motherland, my friends, is not the ass of a president that you have to lick and kiss all the time. The motherland is a poor grandmother selling potatoes at the train station. That is the motherland,” he added.


WASHINGTON — The U.S. has announced a shipment of US$100 million in military equipment to Ukraine, separate from what will be coming from the $40 billion approved Thursday by Congress.


The latest package includes 18 more howitzers as well as anti-artillery radar systems, both of which the U.S. has provided to Ukraine already since Russia invaded Ukraine on Feb. 24. Pentagon press secretary John Kirby said the equipment will be in the hands of Ukrainian forces “very, very soon.”


With this latest shipment, the U.S. has provided nearly $4 billion in military aid since Feb. 24 and $6.6 billion since 2014, when Russia seized and annexed the Crimean Peninsula from Ukraine.


Kirby said the U.S. will consult with Ukraine, as it has frequently since the invasion, about what it needs in terms of equipment.


The troops’ task was to cross the Narew River near the town of Nowogrod, in a region about two hours’ drive from the borders of Russia’s exclave of Kaliningrad and of Russian ally Belarus.


Duda said that, as Ukraine is fighting Russia’s invasion, everyone is “aware of the potential threat” in the region.


Duda said the exercise — which had been planned earlier — would help “show the cooperation and the efficiency of NATO in collective defence.”