Finland and Sweden joining NATO is “not favourable” for Turkey, according to the country’s president.

Recep Tayyip Erdogan indicated on Friday that Turkey could use its status as a member of the military alliance to veto any attempts for the countries to join.

“We are following developments concerning Sweden and Finland, but we are not of a favourable opinion,” he said.

The Turkish leader accused Sweden and other Scandinavian nations of supporting Kurdish militants and other groups Turkey considers to be terrorists.

Mr Erdogan added that he does not want to repeat a past “mistake” when Greece was readmitted to NATO in 1980, claiming the action allowed Greece to “take an attitude against Turkey by taking NATO behind it”.

The president did not directly say he would block the move but NATO makes all decisions through consensus and all 30 member states have veto power for new members.

The US is seeking clarification of his comments.

NATO Secretary-General Jens Stoltenberg said Finland and Sweden should formally apply, adding both would be welcomed with open arms.

Joining could be done in “a couple of weeks”, according to several NATO officials, but it could take almost six months for members to ratify the accession protocol. 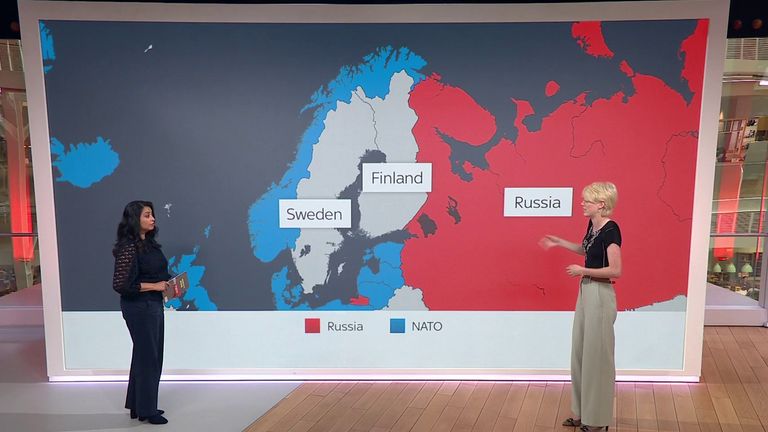 The Kremlin has said Finland’s ambition to apply for NATO membership is “definitely” a threat to Russia and would trigger retaliatory steps.

Meanwhile, the Swedish government has released a report on the changing security environment facing the Nordic country after Russia’s invasion of Ukraine, saying that Moscow would react negatively to Sweden joining NATO.

The report highlighted several advantages of Sweden joining the alliance, including the collective security provided by it.

Read more:
Finland’s NATO application would be a threat to Russia
How a worried Putin might respond to Finland’s NATO membership
How Finland has been preparing for a Russian invasion since 1993

But it also lists numerous tactics Russia is likely to take in retaliation, including cyber and hybrid attacks, and violations of Swedish airspace or territorial sea.

It does not make recommendations as to whether Sweden should join NATO or not and the Foreign Minister Ann Linde has told politicians at the national legislature that “an armed attack on Sweden cannot be ruled out”, pointing to the security guarantee that NATO membership offers.

The president and prime minister of Finland said Thursday that they are in favour of applying for NATO membership, paving the country’s way to formally announce a bid soon.