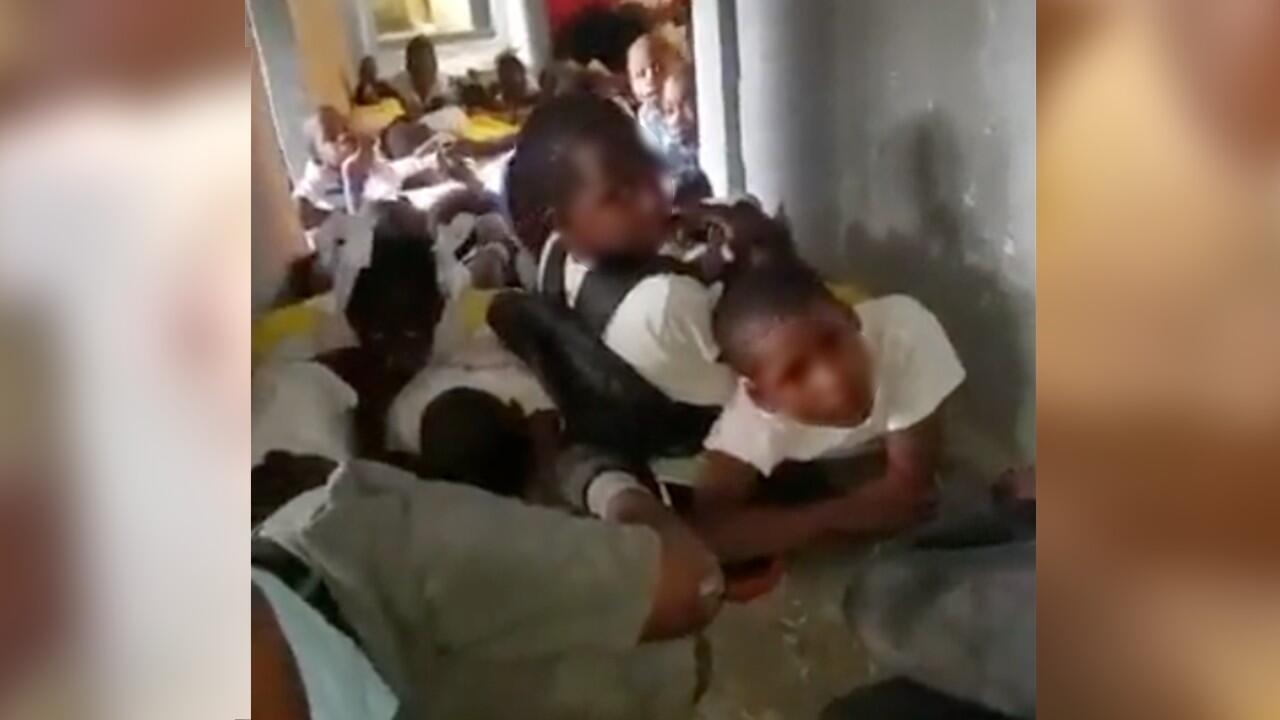 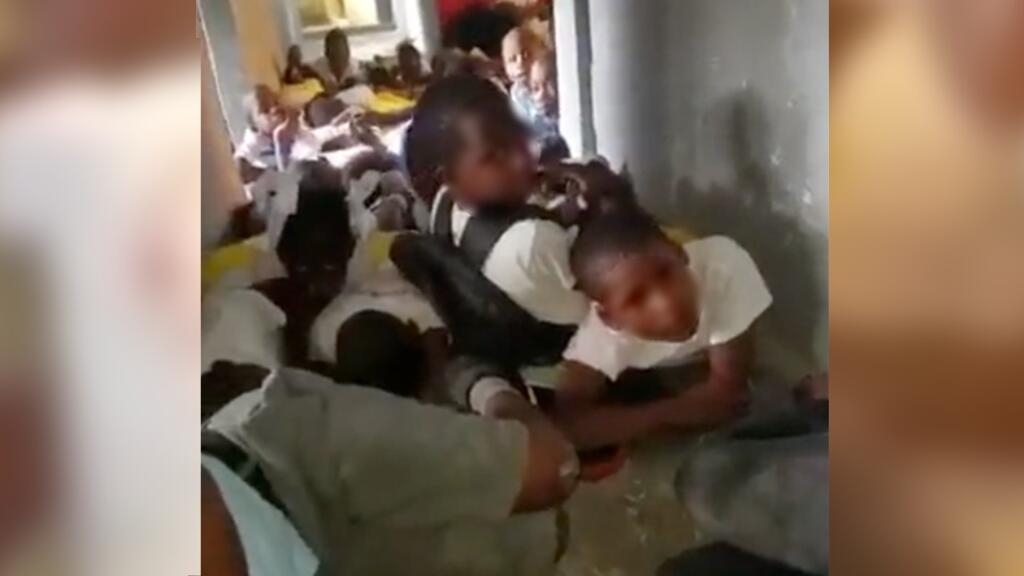 A video filmed by a teacher in Haiti shows dozens of children huddled under their desks or lying in the hall, trying to shield themselves from stray bullets. Our Observer says this video, published on Twitter on May 17, shows the reality for pupils in the suburbs of the capital Port-au-Prince, which has become a battleground for rival gangs.

At least a hundred people have been killed in armed conflicts in Haiti since April 24. Many of the victims have been in la Plaine du Cul-de-Sac, located northeast of Port-au-Prince, where two rival gangs, the 400 Mawozo and the Chien Méchant (a name that translates to “Mean Dog”), have been warring for control of the territory.

As teacher, my heart is broken 💔😭 seeing students of a school at Pernier (Port-au-Prince, Haïti) 🇭🇹 forced to duck to avoid strayed by bullets of armed group.

This video shows children lying on the ground in a school in Pernier, a western suburb of Port-au-Prince. Pernier, part of the commune of Pétion-ville, is the turf of a gang called Vitelhomme Innocent, who have close ties to the larger gang 400 Mawozo. On the back of one of the children’s shirts is a school logo: Institution Salem d’excellence.

A video filmed by a teacher in Haiti shows dozens of schoolchildren crouching under their desks or lying on the floor in the corridors to avoid stray bullets.

When contacted, one of our Observers in Haiti, Niepce Zephirin, said that a local radio station reported clashes between police and gangs near the Institution Salem d’Excellence (ISE) on May 16. This video was not posted online before May 17.

The FRANCE 24 Observers team was not able to reach school officials. However, a former official, who had stayed in touch with school staff, told our team that a teacher filmed the video without permission. The former official, who asked to remain anonymous, said that teachers at the school had asked students to get down after hearing “gunfire at the end of the street”.

‘Some of my students have lost family members’

Raphel Bélizaire is a professor of geography and history at a secondary school in la Plaine du Cul-de-Sac. His students range in age from 10 to 14. He shared the video on Twitter to raise awareness about the situation faced by children in Haiti.

When I saw this video, I just thought, ‘What do the children feel in this situation?’ They try to study but they can never relax.

Some of my students have lost family members. Others have friends or family members who have been kidnapped. Sometimes the parents call the school and explain that their children aren’t coming in because it is too dangerous to go out or because the family has lost someone and is mourning.

According to the United Nations, at least 92 people with no gang affiliation were killed between April 24 and May 16, including children.

These gang wars have resulted in a complete alteration of the socioeconomic situation of the parents who are trapped two or three weeks at home because it is too dangerous to go out. Sometimes, they have to flee their home to stay with friends or even sleep in a public space. That makes it harder for them to pay for school [Editor’s note: in Haiti, 80 percent of schools are private and costly].

Clashes in la Plaine du Cul-de-Sac between the 400 Mawozo and Chien Méchant gangs have already displaced at least 9,000 people since April 24, according to the International Organization for Migration.

This photo shows women and children trying to flee gunfire on May 2 in Damien, a suburb north of Port-au-Prince. The Tweet, in French, by Delphine Gardere reads: Battle scene in front of Barbancourt this morning… the residents of our community in Damien are women and children fleeing under gunfire. @DrArielHenry what are you doing?!!!

I talk to my students about the situation. I hand out sheets of paper where they can write down their feelings. One of them, who lives in a particularly dangerous neighbourhood, told me that he always sleeps under his bed because one of the people in his neighbourhood was shot while sleeping in his bed during armed clashes.

Many people here live in huts made out of corrugated metal so it is entirely possible for bullets to penetrate the walls. My heart broke when he told me that.

More than half a million children have lost access to education because of the insecurity, UNICEF reported on May 5. Hundreds of schools are at the mercy of gangs, which often demand money from school officials to assure children’s safety. Some schools haven’t had enough money and have had to close.

Outside of the most dangerous zones, some schools have been transformed into shelters for the displaced. All in all, UNICEF has counted nearly 1,700 schools closed in the Port-au-Prince metropolitan region, many of which are in la Plaine du Cul-de-Sac and Martissant.

When the situation got worse in la Plaine du Cul-de-Sac, I started teaching online. But some families don’t have electricity, so it is hard. I actually stopped teaching entirely for two weeks because too many students couldn’t attend the lessons.

>> Read more on The Observers: Thousands of schools remain shut as unrest in Haiti takes its toll

Bélizaire began teaching again on May 16. He is currently preparing his students for exams, which are supposed to start on June 6. He hopes that his students will be able to sit their exams in good conditions.

However, he remains worried about the fate of some schoolchildren in dangerous neighbourhoods.

Students have been displaced in the zones most affected by armed groups. They have to leave their homes and school with no idea where to go. Some aren’t able to re-enroll and so it disrupts the school year.

The rate of people leaving school will have negative consequences on Haitian society. We are a country where the literacy levels are already very low [Editor’s note: 61.7 percent in 2016].

Gangs recruit lost young people — they don’t have a future, that is sometimes their only option. [Editor’s note: UNICEF said that they had received ‘credible information’ that children were being recruited by gangs in a statement published on May 5].

The minister of national education, Nesny Manigat, has been working to try and reopen schools. However, it isn’t an easy task.

The minister announced a series of measures on May 20 to help schoolchildren in zones paralysed by gang warfare to sit their exams and finish their academic year.

This Twitter post from the National Haitian Police (PNH) explains that they rescued 27 schoolchildren from a bus that was “taken by armed bandits.” The PNH has carried out several operations in Pernier to try to target gangs. The police often post about their successes on social media along with photos and videos.

A police officer was killed on May 30 in a street near the Salem de l’Excellence school in Pernier. He was taking his son to school.