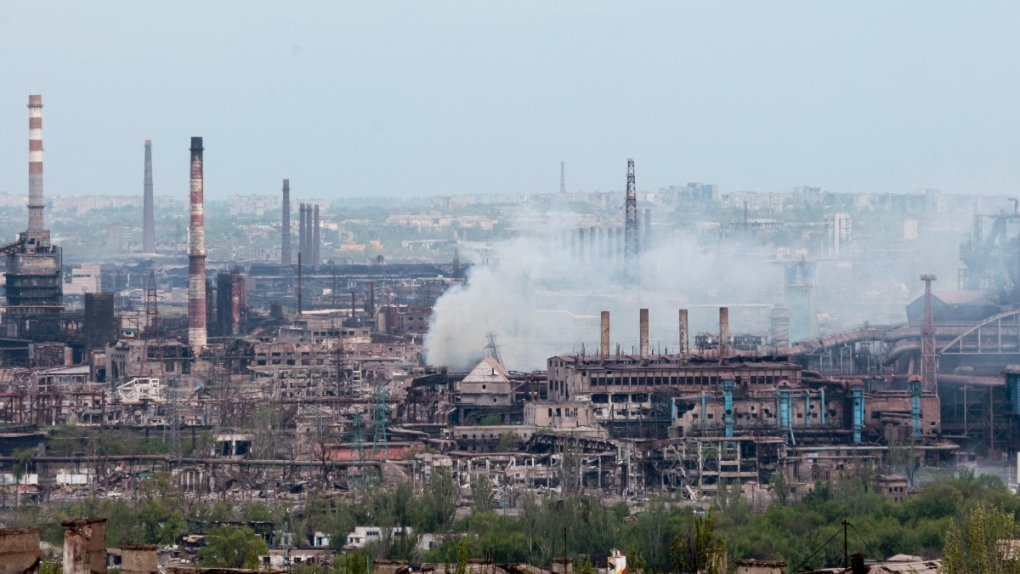 What’s happening in Ukraine today and how are countries around the world responding? Read live updates on President Vladimir Putin’s Russian invasion of Ukraine.


BERLIN — Germany’s defence minister confirmed Friday that her country will supply Ukraine with seven powerful self-propelled howitzers to help defend itself against Russia.


Christine Lambrecht said Ukrainian soldiers will be trained in Germany to use the self-propelled Panzerhaubitze 2000 artillery, which is capable of firing precision ammunition at a distance of up to 40 kilometres.


Germany has stepped up its material support for Ukraine in recent weeks, after the government’s initial reticence to provide heavy weapons drew widespread criticism.


Chancellor Olaf Scholz is due to address the nation Sunday on the anniversary of the end of the Second World War in Europe. The defeat of Nazi Germany by the Allies 77 years ago has increasingly been portrayed as a day of liberation in the country. Scholz’s speech is expected to outline his government’s position on the war in Ukraine.


LVIV, Ukraine — The British military believes Russia wants to take the port city of Mariupol and its vast steel mill before it marks Victory Day on Monday.


The Azovstal steelworks in Mariupol has been the scene of weeks of fighting. It has a vast network of underground bomb shelters shielding fighters and civilians from Russian bombardment, though the site has been repeatedly struck by high-explosive bombs.


The British military said: “The renewed effort by Russia to secure Azovstal and complete the capture of Mariupol is likely linked to the upcoming 9 May Victory Day commemorations and Putin’s desire to have a symbolic success in Ukraine.”


It added: “This effort has come at personnel, equipment and munitions cost to Russia. Whilst Ukrainian resistance continues in Azovstal, Russian losses will continue to build and frustrate their operational plans in southern Donbas.”


LVIV, Ukraine — There are growing suggestions that Ukraine might try to widen its push to seize more territory from Russia outside of Kharkiv, its second-largest city.


Ukrainian chief of defence, Gen. Valerii Zaluzhnyi, said Thursday that a counteroffensive could begin to push Russian forces away from Kharkiv and Izyum, which has been a key node in Russia’s control of the area.


Ukraine in recent days has pushed Russia some 40 kilometres east of Kharkiv, which has been repeatedly struck by Russian shelling.


Further pushing the Russians away may spare the city from more artillery strikes, as well as force Moscow to divert troops from other areas of the front line to maintain its hold on territory there.


The General Staff of the Ukrainian Armed Forces issued a daily statement Friday saying that “the blockade of units of the defence forces in the Azovstal area continues.”


It added: “In some areas, with the support of aviation, resumed assault operations to take control of the plant.”


Elsewhere in the country, the Ukrainian military said Russian forces are conducting surveillance flights of territory. In the hard-hit areas of Donetsk and Luhansk, Ukraine’s military said it repulsed 11 enemy attacks and destroyed tanks and armored vehicles. There was no immediate acknowledgement of those losses by Russia.


WASHINGTON — The Pentagon says the majority of Russian forces that had been around the port city of Mariupol have left and headed north, leaving roughly the equivalent of two battalion tactical groups there, or about 2,000 troops.


Pentagon spokesman John Kirby said Thursday that even as Russian airstrikes continue to bombard Mariupol, Moscow’s forces are still making only “plodding” and incremental progress as the main fight presses on in the eastern Donbas region.


He said he has seen no change in Russian behaviour or momentum as May 9 draws near.


Russia celebrates Victory Day on May 9, the anniversary of the Soviet Union’s defeat of Nazi Germany in the Second World War. There have been suggestions that Russian President Vladimir Putin wants to tout a major victory in Ukraine when he makes his address during the traditional military parade on Red Square.


Kirby said the U.S. still assesses that Russia is behind schedule and not making the progress in the Donbas that it expected.


MARIUPOL, Ukraine — A cleanup operation took place in the centre of Mariupol even as Ukrainian fighters held out against Russian troops in the city’s pulverized steel plant. The rest of the city is now under Russian control.


Municipal workers, as well as volunteers, were seen Thursday clearing debris near gutted, charred buildings, including the drama theatre where hundreds died when the Russian military bombed it in March. Some workers hung a Russian flag on a tall utility pole.


One volunteer, who gave only his first name, Denis, said he was helping restore parks and war monuments so the city could celebrate Victory Day on Monday. Russia celebrates victory over Nazi Germany in the Second World War on May 9.


KYIV, Ukraine — In his nightly video address Thursday, Ukrainian President Volodymyr Zelenskyy described a “catastrophic” lack of access to medical services and medicine in areas of the country under Russian occupation.


In those areas, he said almost no treatment was available for those suffering from cancer and where insulin for diabetics was difficult to find or nonexistent. He said antibiotics were in short supply.


Zelenskyy also said that during the course of the war, the Russian military has already fired 2,014 missiles on Ukraine, while 2,682 flights of Russian warplanes have been recorded in Ukrainian skies. He said the destroyed or damaged infrastructure includes nearly 400 hospitals and other medical facilities.