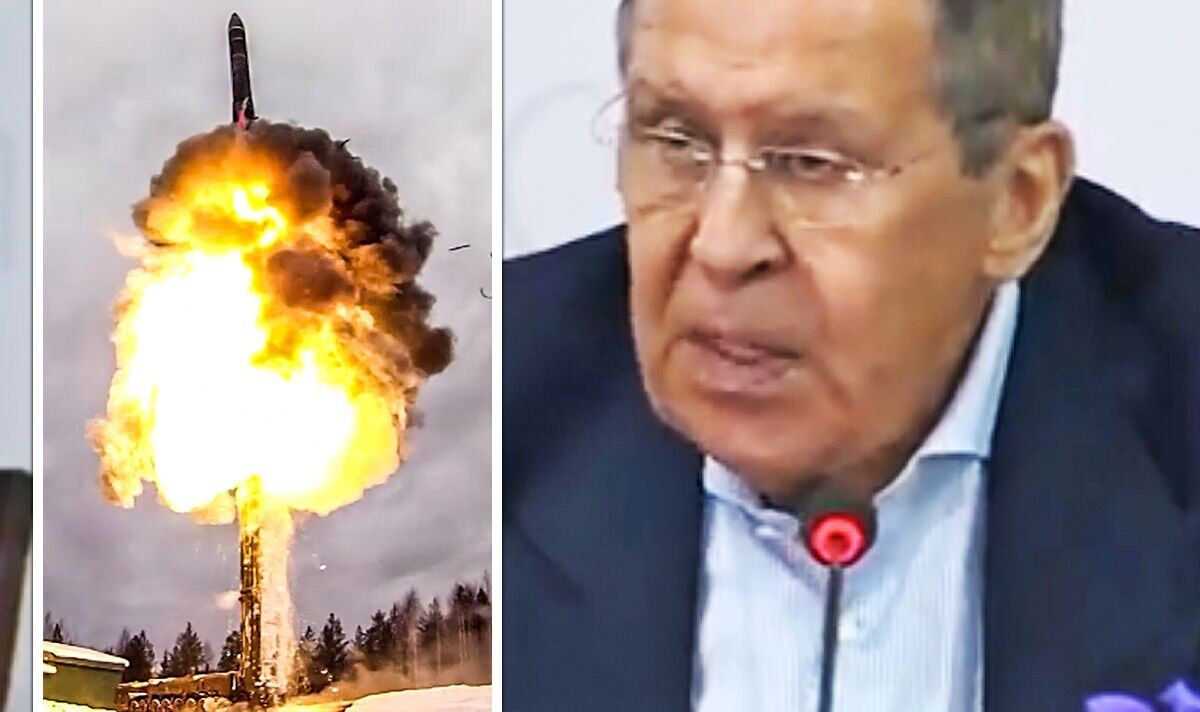 Speaking today (Saturday) to mark the 80th day of Vladimir Putin’s horrific and bloody invasion of Ukraine, Sergei Lavrov warned that “the consequences will be felt by everyone”. It comes after Sweden and Finland signed mutual security pacts with the UK, as the latter Scandinavian country declared its intention to join NATO.

Mr Lavrov pointed to the sweeping sanctions Western nations had placed on Russia in an attempt to portray Russia as the target of aggression, as opposed to the perpetrator of it.

This is in keeping with the Kremlin propaganda the country has pumped out since the war in Ukraine began.

He told a Russian audience: “The collective West has declared total hybrid war on us and it is hard to predict how long all this will last but it is clear the consequences will be felt by everyone, without exception.

“We did everything to avoid a direct clash – but now that the challenge has been thrown down, we of course accept it.

“We are no strangers to sanctions: they were almost always there in one form or another.”

Efforts by the West to isolate Russia were doomed to fail, Mr Lavrov claimed, while pointing to the importance of Russia’s relations with China, India, Algeria and Gulf states.

His comments come two days after Boris Johnson travelled to Finland and Sweden to sign security pacts with the two Scandinavian nations, which pledge military assistance if either party is attacked.

Mr Johnson and Magdalena Andersson, the Swedish Prime Minister, said co-operation was “even more important” given the threat from Russia.

The PM added that the “solemn” declaration between the UK and Finland reflected the “extreme difficulty of the times we are in”.

After Finland stated it wanted to join NATO “without delay”, Kremlin spokesperson Dmitry Peskov said Russia would have to “rebalance the situation” if it did so, the Foreign Ministry suggesting a “military-technical” response.

Since the invasion began, there have been fears among intelligence chiefs that Putin may use his intelligence aparatus to target Western nations, such as the UK, which have been supporting Ukraine militarily.

These concerns have been raised after Russia’s dismal performance against the Ukrainian armed forces, which have so far largely been able to fend off their Russian attackers.

Despite the Russian army’s miscommunication and disorganisation, a cyber attack in Ukraine early on in the invasion has already been attributed to Russian actors by the UK Government.

On Tuesday, the Foreign Office announced that 5 Eyes intelligence suggested Russia was behind an operation that targeted commercial communications company Viasat on February 24, leaving thousands without a connection an hour before troops entered the country.

Foreign Secretary Liz Truss said in a statement: “This is clear and shocking evidence of a deliberate and malicious attack by Russia against Ukraine which had significant consequences on ordinary people and businesses in Ukraine and across Europe.

“We will continue to call out Russia’s malign behaviour and unprovoked aggression across land, sea and cyberspace, and ensure it faces severe consequences.”

As well as threats of cyber warfare, concerns have been raised that Russia may resort to chemical or biological weapons. It has already hinted at using its nuclear option.

Russia is also not averse to targeted attacks on individuals on foreign soil, including in the UK: the Russian Government has already been blamed for the poisoning of Alexander Litvinenko in London and the attempted poisoning of Sergei and Yulia Skripal.

So far, Russia and NATO have trod a fine line to ensure neither involves the other in an active confrontation that would drag the two military powers into a global conflict – despite requests from Ukraine to install a no-fly zone in its airspace.

However, as with any other move to strengthen the alliance against Russia, the Kremlin has viewed the military support afforded to Ukraine as a provocation in itself.